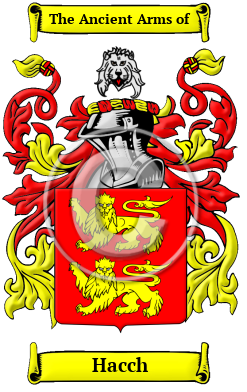 The name Hacch is of Anglo-Saxon origin and came from when the family lived in one of the settlements named Hatch in the counties of Bedfordshire, Hampshire, Somerset, or Wiltshire, or from residence near a hatch or gate which in most cases led to a forest but occasionally led to a sluice. In the latter case, the surname Hacch is derived from the Old English word hæcce, which means hatch or gatekeeper.

The name means "dweller by the gate or entrance to a forest; one who came from Hatch (gate), the name of several places in England." [1] Another source notes the name is derived from "a kind of door or floodgate. These ancient stops or hatches consisted of sundry great stakes and piles erected by fishermen in the river Thames or other streams, for their better convenience of securing fish. Also, a term for gates leading to deer—parks or forests." [2]

"At-Hache and De la Hacche are found in the Hundredorum Rolls. Hache in Domesday appears as a personal name." [3]

Early Origins of the Hacch family

The surname Hacch was first found in the Hundredorum Rolls of 1273 where early records of the family include: Richard de la Hacche, Wiltshire; Agnes apud Hache, Oxfordshire; and John atte Hache, Oxfordshire. The same rolls also listed the name was a forename as in Hache de Wolmersti, Lincolnshire and Hacca filius Pictavini, Lincolnshire. [4]

In Somerset, the first record of the family was Thomas Hach, 1 Edward III (during the first year of the reign of Edward III.) [5]

Early History of the Hacch family

It is only in the last few hundred years that the English language has been standardized. For that reason, early Anglo-Saxon surnames like Hacch are characterized by many spelling variations. As the English language changed and incorporated elements of other European languages, even literate people changed the spelling of their names. Scribes and monks in the Middle Ages spelled names they sounded, so it is common to find several variations that refer to a single person. The variations of the name Hacch include: Hatch, Hacch and others.

Notables of the family at this time include Joseph Hatch, English bellfounder at Ulcombe, near Maidstone, in Kent, England. He was one of the noted bellfounders of three generations of the Hatch family who from 1581 or earlier until 1664 cast hundreds of bells. The bellfounders were based at nearby Broomfield. By example, Joseph cast from 1602 to 1639 at least 155 bells, including "Bell Harry", after which the central tower of Canterbury Cathedral is named. It is thought that Thomas...
Another 79 words (6 lines of text) are included under the topic Early Hacch Notables in all our PDF Extended History products and printed products wherever possible.

Migration of the Hacch family to Ireland

Some of the Hacch family moved to Ireland, but this topic is not covered in this excerpt. More information about their life in Ireland is included in all our PDF Extended History products and printed products wherever possible.

Migration of the Hacch family

Many English families tired of political and religious strife left Britain for the new colonies in North America. Although the trip itself offered no relief - conditions on the ships were extremely cramped, and many travelers arrived diseased, starving, and destitute - these immigrants believed the opportunities that awaited them were worth the risks. Once in the colonies, many of the families did indeed prosper and, in turn, made significant contributions to the culture and economies of the growing colonies. An inquiry into the early roots of North American families has revealed a number of immigrants bearing the name Hacch or a variant listed above: Rebecca Hatch, who came to Virginia in 1623; Phillip Hatch settled in Maine in 1630; Thomas Hatch settled in Virginia in 1619 before the "Mayflower&quot.