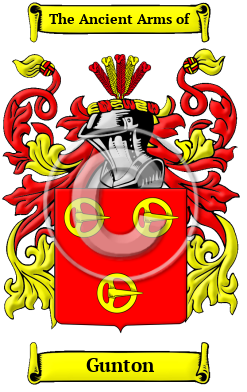 Early Origins of the Gunton family

Gunton is a parish, in the union of Erpingham, hundred of North Erpingham, E. division of Norfolk. "Gunton House, the seat of Lord Suffield, is a noble mansion of white brick, standing on an eminence commanding a beautiful view of the undulated grounds and varied scenery of the park, which is of vast extent, and planted with fine trees. " [2]

And Gunton is a parish, in the hundred of Mutford and Lothingland, E. division of Suffolk. [2]

"This surname is still a representative name in Norfolk. The meaning is "the town" or "enclosure of Gunn." [3]

The Hundredorum Rolls of 1273 list: Geoffrey de Gunneton in Suffolk; and Adam de Guntone in Norfolk. John de Guntion was vicar of Tunstal, Norfolk in 1361. [3]

Early History of the Gunton family

Spelling variations of this family name include: Gunton, Guntin, Gunten, Guntan and others.

Distinguished members of the family include Simon Gunton (1609-1676), an English clergyman and antiquary. He was the "son of William Gunton of Peterborough, Northamptonshire, by Ellen his wife...
Another 27 words (2 lines of text) are included under the topic Early Gunton Notables in all our PDF Extended History products and printed products wherever possible.

Gunton migration to the United States +

Gunton Settlers in United States in the 17th Century

Gunton Settlers in United States in the 19th Century