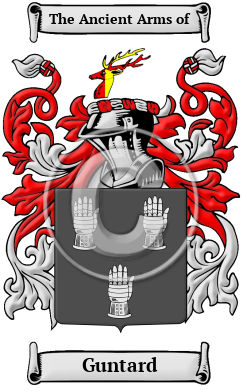 Like many surnames, the name Guntard comes from a personal name, in this case, from Gunter or Gunther. Such names may be patronymic, signifying that the person's father was named Gunther, or they may simply have been chosen arbitrarily at the time when people were taking surnames. Gunther is a French and German name, coming from the Old French "gontier" or the Old German "gunter," both of which mean "battle-army."

However one source notes "a tradition in the family says, from gamut d'or, allusive to the gauntlets in their arms; but this is very improbable." [1]

Another source note that the name could have been originally Norman as the Magni Rotuli Scaccarii Normanniae lists N. Gontier, Normandy 1180. This same source notes that "Sir Peter Gontier or Gunter accompanied Bernard de Neumarchd in the conquest of Brecknock 1088, and obtained a fief there." [2]

Early Origins of the Guntard family

The surname Guntard was first found in Oxfordshire, where two men bearing the first names Gunter and Gonther were recorded in the Domesday Book at that time. [3] [1]

"In Berkshire the name has long been known. In the reign of Henry VI., the Gunters were Berkshire gentlemen. Colonel Gunter, who was a zealous adherent of Charles II., belonged to a family living at Racton, Sussex, in the 16th and 17th centuries, and hailing from Gilleston in Wales before that time. The name also occurs in Gloucestershire, and a reference will be found to it under that county.[4]

Early History of the Guntard family

This web page shows only a small excerpt of our Guntard research. Another 64 words (5 lines of text) covering the years 1094, 1100, 1205, 1221, 1581 and 1626 are included under the topic Early Guntard History in all our PDF Extended History products and printed products wherever possible.

Endless spelling variations are a prevailing characteristic of Norman surnames. Old and Middle English lacked any definite spelling rules, and the introduction of Norman French added an unfamiliar ingredient to the English linguistic stew. French and Latin, the languages of the court, also influenced spellings. Finally, Medieval scribes generally spelled words according to how they sounded, so one person was often referred to by different spellings in different documents. The name has been spelled Gonther, Gunter, Gunther, Guenthner, Guntard and many more.

Outstanding amongst the family at this time was Edmund Gunter (1581-1626), English mathematician and inventor, namesake of Gunter's chain, a measuring device used for land survey and Gunter's rule/scale which...
Another 29 words (2 lines of text) are included under the topic Early Guntard Notables in all our PDF Extended History products and printed products wherever possible.

Migration of the Guntard family

To escape the political and religious persecution within England at the time, many English families left for the various British colonies abroad. The voyage was extremely difficult, though, and the cramped, dank ships caused many to arrive in the New World diseased and starving. But for those who made it, the trip was most often worth it. Many of the families who arrived went on to make valuable contributions to the emerging nations of Canada and the United States. An inquiry into the early roots of North American families reveals a number of immigrants bearing the name Guntard or a variant listed above: Lester Gunter, who arrived in New England in 1635.