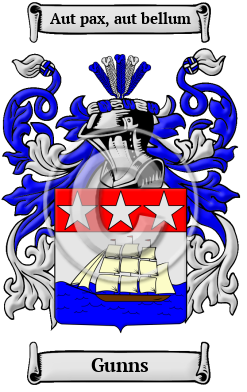 Viking settlers in ancient Scotland were the ancestors of the first people to use the name Gunns. It comes from Gunni, a descendant of Einar and of the great peace Kings of Uppsale in Sweden, progenitor of this great Clan. Gunni was the son of Gillanders, one of the six northern Earls who besieged King Malcolm IV of Scotland at Perth in 1160. The Gunns, the Sinclairs, the Mackays and the Gordons ruled the far northern reaches of Scotland. The Gunns' territory centered in Caithness and Sutherland.

Early Origins of the Gunns family

The surname Gunns was first found in the Orkneys. But perhaps to North Americans the most interesting aspect of Gunn history is the discovery of a Coat of Arms, which is undoubtedly of the Gunn Clan, in Westford, Massachusetts. Chiseled into a rock face, it has been reliably dated back to 1395. This was almost one hundred years before Columbus discovered America. Archaeologists first assumed this marking was the work of an early Indian tribe, but closer examination and the clearance of the scrub, revealed a knight in full armor, a huge sword and a shield on which the Gunn Coat of Arms was displayed.

Early History of the Gunns family

This web page shows only a small excerpt of our Gunns research. Another 152 words (11 lines of text) covering the years 1231, 1438, 1753, 1732, 1740, 1753 and are included under the topic Early Gunns History in all our PDF Extended History products and printed products wherever possible.

Translation and spelling were non-standardized practices in the Middle Ages, so scribes had only their ears to rely on. This was a practice of extremely limited efficiency, and spelling variations in names, even within a single document, were the result. Over the years, Gunns has appeared Gunn, Gun, Guinne (Gaelic) and others.

Another 50 words (4 lines of text) are included under the topic Early Gunns Notables in all our PDF Extended History products and printed products wherever possible.

Migration of the Gunns family to Ireland

Some of the Gunns family moved to Ireland, but this topic is not covered in this excerpt.
Another 66 words (5 lines of text) about their life in Ireland is included in all our PDF Extended History products and printed products wherever possible.

Migration of the Gunns family

The fertile east coast of what would become US and Canada was soon dotted with the farms of Scottish settlers. Some of them remained faithful to the crown and called themselves United Empire Loyalists, while others had the chance to pay back their old oppressors in the American War of Independence. That brave spirit lives on today in the highland games that dot North America in the summer. Passenger and immigration lists indicate that members of the Gunns family came to North America quite early: Daniel Gunn who settled in Boston in 1651; John Gunn settled in Virginia in 1654; William Gunn settled in Jamaica in 1651; John Gunn settled in Nevis in 1654..