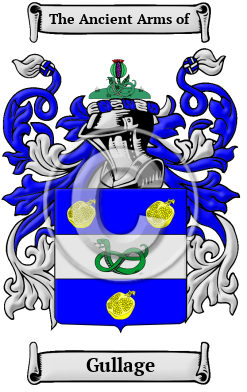 The name Gullage is part of the ancient legacy of the Anglo-Saxon tribes of Britain. It is a product of when the family lived in Coldridge, in Devon. Alternatively, the family dould have originated in Colwich, a parish, in the S. division of the hundred of Pirehill, union, and N. division of the county of Staffordshire. [1]

"A writer in West Scotland said there was a family or families named Colledge resident for many generations at Hawick, Darnick, near Melrose, and Lauder; in Edinburgh for over 200 years and also in Glasgow." [2]

Early Origins of the Gullage family

The surname Gullage was first found in Nottinghamshire, where Brian de Colewich was registered in 1210. [3]

The family were more often than not in "the west of England any court or group of cottages having a common entrance from the street is called a college, and residence at such a place. probably originated the name." [4]

Records of the family are very scarce. The Wills at Chester list John Colledge, of Colne, dotkworker, 1639. [5]

Early History of the Gullage family

This web page shows only a small excerpt of our Gullage research. Another 63 words (4 lines of text) covering the years 1578, 1639, 1670, 1635 and 1681 are included under the topic Early Gullage History in all our PDF Extended History products and printed products wherever possible.

The first dictionaries that appeared in the last few hundred years did much to standardize the English language. Before that time, spelling variations in names were a common occurrence. The language was changing, incorporating pieces of other languages, and the spelling of names changed with it. Gullage has been spelled many different ways, including Colledge, College, Collage, Gollege, Golledge, Callage, Calledge, Gollidge, Collige, Collidge and many more.

Another 44 words (3 lines of text) are included under the topic Early Gullage Notables in all our PDF Extended History products and printed products wherever possible.

Migration of the Gullage family

Thousands of English families in this era began to emigrate the New World in search of land and freedom from religious and political persecution. Although the passage was expensive and the ships were dark, crowded, and unsafe, those who made the voyage safely were rewarded with opportunities unavailable to them in their homeland. Research into passenger and immigration lists has revealed some of the very first Gullages to arrive in North America: George Colledge who arrived in Virginia in 1637.