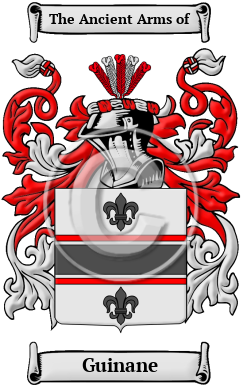 The surname Guinane comes from the Irish surname O Cuanain (O'Conein and MacConein) and is derived from the Irish Cuinin for "rabbit", son of Dugal. They claim descendancy through the Donnelly line of the native Irish.

Early Origins of the Guinane family

The surname Guinane was first found in County Tipperary (Irish: Thiobraid Árann), established in the 13th century in South-central Ireland, in the province of Munster, where Isaac O Cuanain was Bishop of Roscrea from 1161 to 1168. But the name was scattered throughout Ireland, some bearers being recorded in Kildare and the surrounding counties in the 16th century. Bearers of the name Guinane were also present in County Sligo, where O'Cunane was a principal Irish name in the census of 1659. The two baronies of County Leitrim which border County Sligo, had the name O'Conan listed in the same census.

Early History of the Guinane family

This web page shows only a small excerpt of our Guinane research. Another 62 words (4 lines of text) covering the year 1666 is included under the topic Early Guinane History in all our PDF Extended History products and printed products wherever possible.

More information is included under the topic Early Guinane Notables in all our PDF Extended History products and printed products wherever possible.

Guinane migration to the United States +

Guinane Settlers in United States in the 20th Century

Guinane Settlers in Canada in the 20th Century