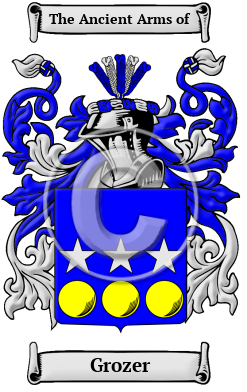 Early Origins of the Grozer family

The surname Grozer was first found in Oxfordshire where they held a family seat but we may conclude that it is from some source in Normandy where the name was popular in pre-conquest times. The Grossarts were an ancient French family of Rotterdam.

The Groser or Grozer variant was first seen in Colchester where John Grocer was listed in 1350. [1]

Early History of the Grozer family

This web page shows only a small excerpt of our Grozer research. Another 133 words (10 lines of text) covering the years 1279, 1711, 1714, 1760 and 1737 are included under the topic Early Grozer History in all our PDF Extended History products and printed products wherever possible.

More information is included under the topic Early Grozer Notables in all our PDF Extended History products and printed products wherever possible.

Migration of the Grozer family

Some of the first settlers of this family name or some of its variants were: Christopher Grossert, who settled in Philadelphia in 1743; Adam Grosshart, who settled in Pennsylvania in 1771; as well as Catherine Grosset, who left Acadia for South America in 1765..