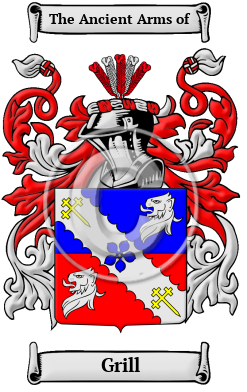 Early Origins of the Grill family

The surname Grill was first found in Cornwall where they held a family seat as Lords of the Manor of Lanreth.

Early History of the Grill family

This web page shows only a small excerpt of our Grill research. Another 256 words (18 lines of text) covering the years 1720, 1611, 1644, 1644 and 1722 are included under the topic Early Grill History in all our PDF Extended History products and printed products wherever possible.

Notable amongst the family at this time was Sir John Grills knighted in 1644, Sheriff of Cornwall. "The [manor of Faweton, Conrwall] now belongs to the Rev. Richard Gerveys Grylls of Helston; one moiety by inheritance from Sir John Grylls his ancestor, and the other by purchase from its...
Another 49 words (4 lines of text) are included under the topic Early Grill Notables in all our PDF Extended History products and printed products wherever possible.

In the United States, the name Grill is the 10,222nd most popular surname with an estimated 2,487 people with that name. [2]

Grill migration to the United States +

Grill Settlers in United States in the 18th Century

Grill Settlers in United States in the 19th Century