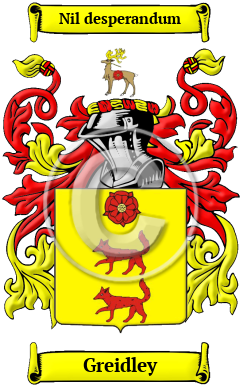 Early Origins of the Greidley family

The surname Greidley was first found in the area that has since become the country of Lancashire. In 1069 King William gave his kinsman, Roger de Pictou, the land between the rivers Mersey and Ribble, who in turn shared land with his kinsman Albert de Greslet. Records during the reign of King John (1199-1216) show that some of this land belonged to Albert de Greslet. The latter was also known as Albert Grelley; he became the first Baron of Manchester, and the Grelley family held the manor for the next 200 years. A Robert Greslet is on record in the Pipe Rolls of Yorkshire of 1130; Peter de Gresley was patron of the rectory of Manchester in 1276. Some of the family were later found at Worthington in Lancashire. "This place, anciently called Worthinton, was allotted, soon after the Domesday Survey, to Albert Greslet. A family of the local name were resident at the Hall in 1588." [1]

Early History of the Greidley family

This web page shows only a small excerpt of our Greidley research. Another 87 words (6 lines of text) covering the years 1542, 1347, 1777 and 1833 are included under the topic Early Greidley History in all our PDF Extended History products and printed products wherever possible.

Another 28 words (2 lines of text) are included under the topic Early Greidley Notables in all our PDF Extended History products and printed products wherever possible.

Migration of the Greidley family to Ireland

Some of the Greidley family moved to Ireland, but this topic is not covered in this excerpt. More information about their life in Ireland is included in all our PDF Extended History products and printed products wherever possible.

Migration of the Greidley family