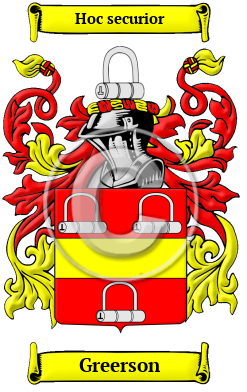 In the Scottish/English Borderlands, the Strathclyde Britons were the first to use the name Greerson. It is derived from Grier, a pet form of the given name Gregory, which means watchful.

Early Origins of the Greerson family

The surname Greerson was first found in Dumfriesshire (Gaelic: Siorrachd Dhùn Phris), a Southern area, bordering on England that today forms part of the Dumfries and Galloway Council Area, where they held a family seat from very ancient times.

Early History of the Greerson family

In Medieval times, spelling and translation were not nearly so highly developed as today. They were generally carried out according to the sound and intuition of the bearer. For that reason spelling variations are extremely common among early Scottish names. Greerson has been spelled Grierson, Greson, Greyson, Grayson, Greirson and others.

Notable amongst the family at this time was John Grierson or Grisson (died 1564?), a Scottish Dominican who is believed to have been from the family of Grierson of Lag in Dumfriesshire. [2] Sir Robert Grierson of Lag (1657-1733), was 1st Baronet of Baronets of Lag & Rockhall, Dumfriesshire. He was "persecutor of the covenanters, was descended from an old Dumfriesshire family which claimed as an ancestor the highland chief Malcolm, lord of Macgregor, the friend and ally of Robert Bruce. The lands of Lag are said to have been bestowed on Gilbert Grierson by Henry, earl of...
Another 96 words (7 lines of text) are included under the topic Early Greerson Notables in all our PDF Extended History products and printed products wherever possible.

Migration of the Greerson family to Ireland

Some of the Greerson family moved to Ireland, but this topic is not covered in this excerpt. More information about their life in Ireland is included in all our PDF Extended History products and printed products wherever possible.

Migration of the Greerson family

Unrest, poverty, and persecution caused thousands to look for opportunity and freedom in the North American colonies. The crossing was long, overcrowded, and unsanitary, though, and came only at great expense. Many Strathclyde families settled on the east coast of North America in communities that would form the backbone of what would become the great nations of the United States and Canada. The American War of Independence caused those who remained loyal to England to move north to Canada as United Empire Loyalists. In the 20th century, Strathclyde and other Scottish families across North America began to recover their collective heritage through highland games and Clan societies. Among them: William Grayson who settled in Wilmington N.C. in 1804; James Grierson settled in New Jersey in 1685; John and Jane Grierson settled in Charles Town [Charleston], South Carolina in 1774..