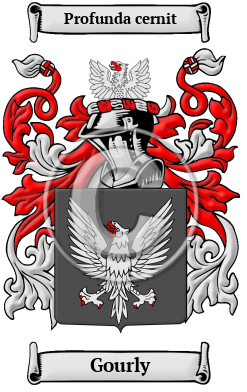 Early Origins of the Gourly family

The surname Gourly was first found in Lothian, where "Ingelram de Gourlay is believed to have accompanied William the Lion from England in 1174, and witnesses one of his charters about 1200." [1]

Early History of the Gourly family

More information is included under the topic Early Gourly Notables in all our PDF Extended History products and printed products wherever possible.

Migration of the Gourly family to Ireland

Some of the Gourly family moved to Ireland, but this topic is not covered in this excerpt.
Another 74 words (5 lines of text) about their life in Ireland is included in all our PDF Extended History products and printed products wherever possible.

Gourly migration to the United States +

Gourly Settlers in United States in the 19th Century

Gourly Settlers in New Zealand in the 19th Century