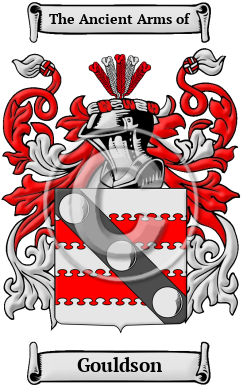 Early Origins of the Gouldson family

The surname Gouldson was first found in the Domesday Book of 1086 where there are two listings of the family: Goldstan in Kent, and Goilstan in Essex. [1]

Early History of the Gouldson family

Distinguished members of the family include Theodore Goulston or Gulston (1572-1632), English physician, son of William Goulston, rector of Wymondham, Leicestershire. William Gulston (1636-1684), was an English clergyman, Bishop of Bristol from 1679; and...
Another 33 words (2 lines of text) are included under the topic Early Gouldson Notables in all our PDF Extended History products and printed products wherever possible.

Gouldson migration to the United States +

Gouldson Settlers in United States in the 17th Century

Gouldson Settlers in United States in the 18th Century