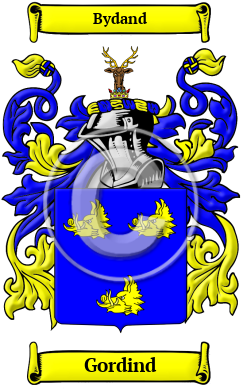 Behind the name Gordind is a story that begins in the ancient Scottish-English border region among the clans of the Boernician tribe. The Gordind family lived on the lands of Gordon, in the former county of Berwickshire, since ancient times. There is little doubt that bearers of Gordind came to Britiain with the Normans, and it is generally thought that they descend from the place named "Gourdon" in Saone-et-Loire, Normandy, but the oldest roots of the bearers of Gordind in Scotland may lie with the Boernician tribe of ancient Scotland. It is entirely possible that the Gordind surname was created from a pre-existing place name Gordon. It has been suggested that this place-name was originally derived from the Welsh (ancient Brithonic) words, gor and din, which mean "spacious" and "fort," and such, Gordind would be a type hereditary surname, known as a habitation name: one that is derived from a pre-exiting name for a town, village, parish, or farmstead.

Early Origins of the Gordind family

The surname Gordind was first found in Berwickshire an ancient county of Scotland, presently part of the Scottish Borders Council Area, located in the eastern part of the Borders Region of Scotland, where legend has it that they were granted lands by King Malcolm Ceanmore, successor to MacBeth, in 1057, thus placing bearers of the name in lowland Scotland, before the invasion of the Normans.

Early History of the Gordind family

Before the printing press and the first dictionaries appeared, names and other words were often spelled differently every time they were written. Gordind has appeared under the variations Gordon, Gordun, Gôrdon (Gaelic) and others.

Notable amongst the family name during their early history was Sir Adam de Gordon, Lord of Gordon (died 1402), 14th-century Scottish baron; Alexander Seton, 1st Earl of Huntly (died 1470) when he succeeded his father as Lord Gordon he began using his mother's family name of Gordon, was knighted in 1439 and was Lord of Badenoch, Gordon, Strathbogie & Cluny and his son George Gordon, 2nd Earl of Huntly (died 1501) was a Scottish nobleman and Chancellor of Scotland from 1498-1501; George Gordon, 4th Earl of Huntly (1514-1562), Scottish nobleman, Lord High Chancellor in 1546 who led a revolt against Mary...
Another 129 words (9 lines of text) are included under the topic Early Gordind Notables in all our PDF Extended History products and printed products wherever possible.

Migration of the Gordind family to Ireland

Some of the Gordind family moved to Ireland, but this topic is not covered in this excerpt.
Another 77 words (6 lines of text) about their life in Ireland is included in all our PDF Extended History products and printed products wherever possible.

Migration of the Gordind family

The Scots who crossed the Atlantic were often on the run from poverty as well as persecution. They brought little with them, and often had nothing of their home country to hand down to their children. In the 20th century, Clan societies and other patriotic Scottish organizations have helped the ancestors of Boernician Scots to recover their lost national legacy. Many of those families went on to make significant contributions to the rapidly developing colonies in which they settled. Early North American records indicate many people bearing the name Gordind were among those contributors: Alexander Gordon who settled in New England in 1652; George Gordon settled in Virginia in 1636; Laughlath Gordon settled in Boston in 1652; Nicholas Gordon settled in Virginia in 1635.