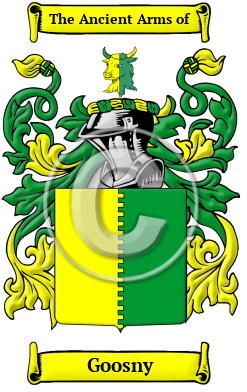 Early Origins of the Goosny family

The surname Goosny was first found in Suffolk where they held a family seat as Lords of the Manor.

The Gosnay variant and its phonetic variations originated later in Yorkshire where John Gosnay was listed as holding lands in 1447. In this case the name meant "dweller at the island frequented by geese," from the Old English "gos, neg." [1]

Early History of the Goosny family

Distinguished members of the family include Bartholomew Gosnold (1571-1607), an English lawyer, explorer, and privateer who was instrumental in founding the Virginia Company of London, and Jamestown in colonial America. He led the first recorded European expedition...
Another 36 words (3 lines of text) are included under the topic Early Goosny Notables in all our PDF Extended History products and printed products wherever possible.

Migration of the Goosny family to Ireland

Some of the Goosny family moved to Ireland, but this topic is not covered in this excerpt.
Another 103 words (7 lines of text) about their life in Ireland is included in all our PDF Extended History products and printed products wherever possible.

Migration of the Goosny family