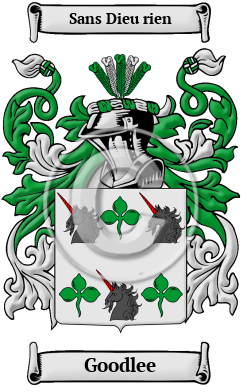 Early Origins of the Goodlee family

The surname Goodlee was first found in Cheshire at Godley, a township, in the parish of Mottramin-Longdendale, union of Ashton-under-Lyne, hundred of Macclesfield. "Godley is a variant of Godelegh, the name of the possessors of the place in the reign of John: the manor was afterwards held by the Baguleys, who purchased of the Godleys in 1319. [1]

Early History of the Goodlee family

Distinguished members of the family include the two baronetcies. John Arthur Godley, 1st Baron Kilbracken GCB (1847-1932), was an Anglo-Irish aristocrat and British civil servant. Barons Kilbracken (1909)...
Another 27 words (2 lines of text) are included under the topic Early Goodlee Notables in all our PDF Extended History products and printed products wherever possible.

Migration of the Goodlee family to Ireland

Some of the Goodlee family moved to Ireland, but this topic is not covered in this excerpt.
Another 76 words (5 lines of text) about their life in Ireland is included in all our PDF Extended History products and printed products wherever possible.

Migration of the Goodlee family