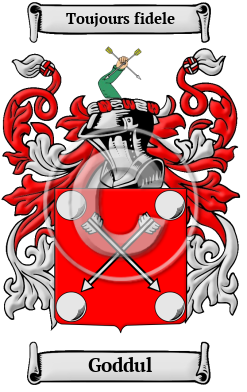 The name Goddul was brought to England by the Normans when they conquered the country in 1066. The ancestors of the Goddul family lived in Yorkshire, which was the largest county in northern England and was divided into three administrative ridings, North Riding, West Riding, and East Riding. It was bordered by the counties of Durham, Westmorland, Lancashire, Cheshire, Nottinghamshire and Lincolnshire. The town of York was the military capital of Roman Britain, the capital of Northumbria, and was the seat of an Archbishop. Yorkshire was also the home of the House of York, which was an English royal dynasty from 1461 to 1485. The reigning members of the House of York were Edward IV, Edward V and Richard III. Their rivalry with the House of Lancaster resulted in the Wars of the Roses, which lasted from 1455 to 1485 and ended when the Lancastrian Henry VII united the two houses by marrying Elizabeth, the daughter of Edward IV.

Early Origins of the Goddul family

The surname Goddul was first found in West Riding of Yorkshire at Gowdall, a township, in the parish of Snaith, union of Goole, Lower division of the wapentake of Osgoldcross. [1]

Early History of the Goddul family

It is only in the last few hundred years that the English language has been standardized. For that reason, Anglo-Norman surnames like Goddul are characterized by many spelling variations. Scribes and monks in the Middle Ages spelled names they sounded, so it is common to find several variations that refer to a single person. As the English language changed and incorporated elements of other European languages such as Norman French and Latin, even literate people regularly changed the spelling of their names. The variations of the name Goddul include Goodall, Goodale, Godall, Godale, Goodell and others.

Outstanding amongst the family at this time was Charles Goodall . (1642-1712), English physician, born in Suffolk in 1642, studied medicine at Leyden, and graduated M.D. at Cambridge 26 Nov. 1670...
Another 31 words (2 lines of text) are included under the topic Early Goddul Notables in all our PDF Extended History products and printed products wherever possible.

Migration of the Goddul family to Ireland

Some of the Goddul family moved to Ireland, but this topic is not covered in this excerpt.
Another 37 words (3 lines of text) about their life in Ireland is included in all our PDF Extended History products and printed products wherever possible.

Migration of the Goddul family

Faced with the chaos present in England at that time, many English families looked towards the open frontiers of the New World with its opportunities to escape oppression and starvation. People migrated to North America, as well as Australia and Ireland in droves, paying exorbitant rates for passages in cramped, unsafe ships. Many of the settlers did not make the long passage alive, but those who did see the shores of North America were welcomed with great opportunity. Many of the families that came from England went on to make essential contributions to the emerging nations of Canada and the United States. Some of the first immigrants to cross the Atlantic and come to North America carried the name Goddul, or a variant listed above: Abraham Goodale who settled in Boston Massachusetts in 1634; along with Isaac, Catherin, Mary (2); Robert Goodale settled in Salem in 1634; Thomas Goodale settled in Boston in 1716.