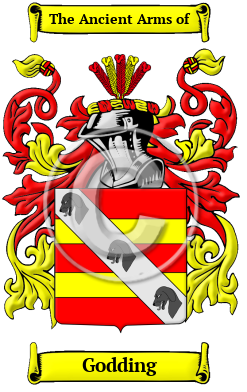 Early Origins of the Godding family

The same rolls include Godun le Bere in Cheshire. Later Philip Guodun, Guodin was listed in the Assize Rolls of Somerset in 1280. [2]

The name is derived from "God or good. Saxon, and win, conqueror, that is, a conqueror in God, converted or victorious in God." [3]

"Godden is an ancient Kent surname. The vicar of Reculver in 1663 was thus named, and in Folkestone church there is, or was, a memorial to a Godden of the date of 1636. The Goddens held the manor of Leyborne and much other property in the county during the 16th. century; and back in the 14th century we find a family of De Godden holding the manor of Godden in Tenterden parish, where the surname yet remains. This is in fact an early English surname, being represented in the forms of Godin and Goding in the adjacent county of Sussex during the 13th century." [5]

Early History of the Godding family

Spelling variations of this family name include: Godden, Goden, Kodden, Goddings, Godding, Goddin and many more.

Distinguished members of the family include Thomas Godden, (1624-1688) born Thomas Tylden, an English courtier implicated in the Titus Oates plot. He was the son of William Tylden, gentleman, of Dartford, Kent and was born at Addington in that county in 1624, and educated at a private school kept by Mr. Gill in Holborn. "In 1661 he was appointed chaplain and preceptor to the Princess Catharine of Braganza, the destined consort of Charles II, and the year following he accompanied her to England, and had apartments assigned to him in the palace of Somerset House. In 1678 Godden was accused of...
Another 112 words (8 lines of text) are included under the topic Early Godding Notables in all our PDF Extended History products and printed products wherever possible.

Migration of the Godding family

Historic Events for the Godding family +