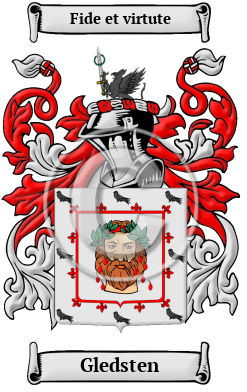 Gledsten is an ancient Scottish name that was first used by the Strathclyde-Briton people of the Scottish/English Borderlands. It is a name for someone who lived at Gledstanes in Lanarkshire. The place-name itself is derived from the Old English words glede, which means kite, and stan, which means stone. In this case the word kite applies in its original sense as a bird of prey of the hawk family that is distinguished by its forked tail. [1]

Early Origins of the Gledsten family

The surname Gledsten was first found in Lanarkshire (Gaelic: Siorrachd Lannraig) a former county in the central Strathclyde region of Scotland. "Herbert de Gledstan or Gledestane of the county of Lanark, who took the oath of fealty to Edward I in 1296 is the first of the name on record. William de Gledstanes witnessed a charter by Roger de Auldton, c. 1354, and Sir William of Gledstanes, probably the same person, was present at the battle of Poitiers in 1356. Andrew de Gledstan was a witness in Brechin in 1364, Andrew of Gledstanis was arrested in Norwich, England, in violation of the truce in 1396. " [4]

Early History of the Gledsten family

Prior to the first dictionaries, scribes spelled words according to sound. This, and the fact that Scottish names were repeatedly translated from Gaelic to English and back, contributed to the enormous number of spelling variations in Scottish names. Gledsten has been spelled Gladstone, Gladston, Gledstone, Gledstanes and others.

Notable amongst the family at this time was John Gladstanes (d. 1574), Scottish advocate, "first mentioned on 21 Feb. 1533, at which date he was designated 'M. Johannes Gladstanes, licentiatus utroque jure.' In 1534 there was a James Gladstanes of Coklaw, an estate with a defensible tower in Roxburghshire, which had been possessed by the family for many previous generations. It is averred that John Gladstanes was a member of the Coklaw family, and his mother was a Fraser; but circumstances rather indicate the upper ward of Lanarkshire as the locality of his birth. " [6] George Gladstanes (d. 1615), was Archbishop...
Another 189 words (14 lines of text) are included under the topic Early Gledsten Notables in all our PDF Extended History products and printed products wherever possible.

Migration of the Gledsten family

In such difficult times, the difficulties of raising the money to cross the Atlantic to North America did not seem so large compared to the problems of keeping a family together in Scotland. It was a journey well worth the cost, since it was rewarded with land and freedom the Scots could not find at home. The American War of Independence solidified that freedom, and many of those settlers went on to play important parts in the forging of a great nation. Among them: John Gladestone who settled in Philadelphia in 1744.