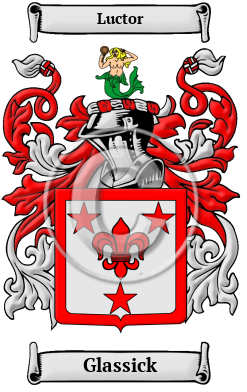 Scotland's coastal mountains and Hebrides islands were known in ancient times as the kingdom of Dalriada. The name Glassick evolved there as a nickname for a person with gray hair. The surname Glass is derived from the Gaelic word glas, which means gray, however, it may also be a shortened Anglicized form of the surname MacGille Glais, which means son of the gray lad. [1]

Early Origins of the Glassick family

The surname Glassick was first found in Buteshire (Gaelic Siorrachd Bhòid), an island region of western Scotland within the ancient Kingdom of Dál Riata, now part of the Council Area of Argyll and Bute. Glass is a "parish, of which the name, in the Gaelic language, signifying "grey," is descriptive of the uncultivated portion of its surface, is about eight miles in extreme length, and five miles in extreme breadth, comprising an area of nearly 19,000 acres." [3]

Early History of the Glassick family

Spelling in the medieval era was a highly imprecise process. Translation, particularly from Gaelic to English, was little better. For these reasons, early Scottish names are rife with spelling variations. In various documents Glassick has been spelled Glass, Glas, MacGilleglas, Glasse and others.

Notable amongst the Clan from early times was John Glas (1695-1773), Scottish sectary, only son of Alexander Glas (d. 1724), minister of Auchtermuchty, Fifeshire, afterwards of Kinclaven, Perthshire. He was born at Auchtermuchty on 21 Sept. 1695. "Glas was of even and cheerful disposition, in company free from professional stiffness, and not without a sense of humour. ‘I too can be grave at times,’...
Another 63 words (4 lines of text) are included under the topic Early Glassick Notables in all our PDF Extended History products and printed products wherever possible.

Migration of the Glassick family to Ireland

Some of the Glassick family moved to Ireland, but this topic is not covered in this excerpt.
Another 60 words (4 lines of text) about their life in Ireland is included in all our PDF Extended History products and printed products wherever possible.

Migration of the Glassick family

Many settled along the east coast of what would become the United States and Canada. As the American War of Independence broke out, those who remained loyal to the crown went north to Canada as United Empire Loyalists. The ancestors of all of these hardy Dalriadan-Scottish settlers began to recover their collective history in the 20th century with the advent of the vibrant culture fostered by highland games and Clan societies in North America. Highland games, clan societies, and other organizations generated much renewed interest in Scottish heritage in the 20th century. The Glassick were among the earliest of the Scottish settlers as immigration passenger lists have shown: Duncan Glass who settled in Virginia in 1651 with his wife Mary; William Glass settled in New England in 1709 with his wife, two sons and two daughters.