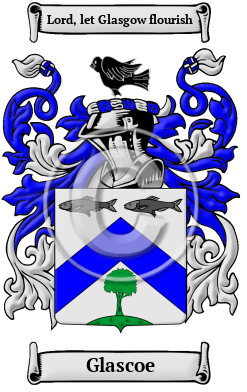 The Strathclyde-Briton people of ancient Scotland were the first to use the name Glascoe. The Glascoe family lived in the city of Glasgow on the river Clyde in the county of Renfrew (first recorded in 1116 as Glasgu), or from either of two minor places with the same name in Aberdeenshire. The origins of the place name are uncertain, it may come from the Welsh glas, or "gray," and cau, meaning "hollows."

Early Origins of the Glascoe family

The surname Glascoe was first found in Renfrewshire (Gaelic: Siorrachd Rinn Friù), a historic county of Scotland, today encompassing the Council Areas of Renfrew, East Renfrewshire, and Iverclyde, in the Strathclyde region of southwestern Scotland, where they held a family seat from very ancient times, some say well before the Norman Conquest and the arrival of Duke William at Hastings in 1066 A.D.

Early History of the Glascoe family

This web page shows only a small excerpt of our Glascoe research. Another 74 words (5 lines of text) covering the years 1258, 1299, and 1343 are included under the topic Early Glascoe History in all our PDF Extended History products and printed products wherever possible.

The variation in the spelling of Medieval names is a result of the lack of spelling rules in the English language prior to the last few hundred years. Before that time, scribes spelled according to sound, often varying the spelling of name within a single document. Glascoe has appeared as Glassgow, Glasgow, Glassgaw and others.

More information is included under the topic Early Glascoe Notables in all our PDF Extended History products and printed products wherever possible.

Migration of the Glascoe family to Ireland

Some of the Glascoe family moved to Ireland, but this topic is not covered in this excerpt.
Another 61 words (4 lines of text) about their life in Ireland is included in all our PDF Extended History products and printed products wherever possible.

Glascoe migration to the United States +

Glascoe Settlers in United States in the 19th Century