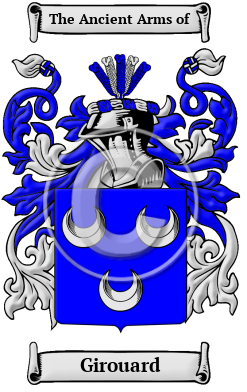 Early Origins of the Girouard family

The surname Girouard was first found in Languedoc where this celebrated family held a family seat from ancient times.

This noble family acquired the title of Marquis de Vessey under Philippe Giroux, aide-de-camp of the armies of the King, in the late 1600's. A branch of the family formed during the 1700's and distinctive members from this branch were three colonels of the cavalry, Knights of Saint-Louis and consuls of Rodez. As a result of branching to various provinces, the spelling of the family name changed according to different pronunciations throughout France. At the time of the French Revolution, many members of this family are recorded because of their active role in the political changes that surrounded this event.

Distinctive among these members was Étienne Giroult, an Administrator and Legislator, who was elected as a Deputy to the Legislature on September 10, 1791, and who voted with the minority. Consequently, he was branded a counter-revolutionary and was wanted by the police. Étienne hid in a Church to avoid being arrested, but he was found there and jumped off the top of the church before being charged by the police.

Toussaint Giroux, born in 1636, son of Jean and Marguerite (née Quilleron), arrived in Canada from Perche, France on 29th September 1654. In Quebec he worked as a weaver and a land clearer. He married Marie Godard in 1654 and together they had twelve children. After Marie's death, Toussaint remarried to Thérèse Leblanc in Beauport, Quebec on 29th October 1686. [1]

Early History of the Girouard family

More information is included under the topic Early Girouard Notables in all our PDF Extended History products and printed products wherever possible.

Girouard migration to the United States +

Girouard Settlers in United States in the 18th Century

Girouard Settlers in Canada in the 17th Century

Girouard Settlers in Canada in the 18th Century