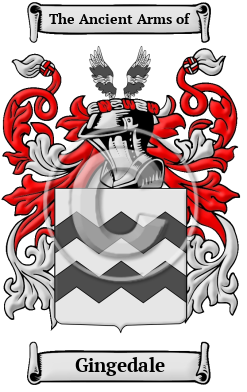 The Gingedale surname is of uncertain origins, but is thought to be a local name for someone "of Gingdale."

Early Origins of the Gingedale family

The surname Gingedale was first found in Wiltshire and Gloucester where they held a family seat. After the Battle of Hastings in 1066, William, Duke of Normandy, having prevailed over King Harold, granted most of Britain to his many victorious Barons. After many rebellious wars between his Barons, Duke William, commissioned a census of all England in 1086, settling once and for all, who held which land. He called the census the Domesday Book, [1] indicating that those holders registered would hold the land until the end of time.

Early History of the Gingedale family

Spelling variations of this family name include: Gingell, Gingold, Gingle, Gingen, Ginkell and many more.

Outstanding amongst the family at this time was Godert de Ginkell, 1st Earl of Athlone (1630-1703), eldest son of Godard Adriaan van Reede, Baron Ginkel, born at Utrecht in 1630. He was educated for a military career, and...
Another 38 words (3 lines of text) are included under the topic Early Gingedale Notables in all our PDF Extended History products and printed products wherever possible.

Migration of the Gingedale family

Some of the first settlers of this family name or some of its variants were: John Gingen, who arrived in Massachusetts in 1646; and other immigrants who settled along the eastern seaboard from Newfoundland, to Maine, to Virginia, and the Carolinas..