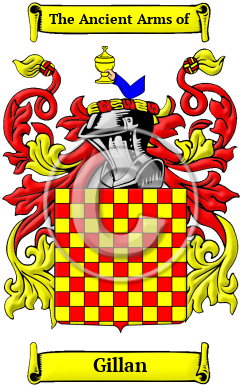 The Gillan surname is a reduced Anglicized form of the Irish Gaelic Mac Gille Fhaoláin, which means "son of the servant of St Faolán." While the name may have originated in Ireland, this line was extant by the beginning of the 17th century, only to find many of the family to return to Ireland about 100 years later with the Plantation of Ulster.

Early Origins of the Gillan family

The surname Gillan was first found in Midlothian, where Gilbert McGillelane or McGillolane was listed as captain of Clan Connan of Galloway during the reign of David II (1324-1371). Also during this time, Ingeram M'Gillelan held a lease of lands in the barony of Redcastle in 1372. [1]

Early History of the Gillan family

This web page shows only a small excerpt of our Gillan research. Another 89 words (6 lines of text) covering the years 1206, 1667, 1735, 1731, 1735, and 1847 are included under the topic Early Gillan History in all our PDF Extended History products and printed products wherever possible.

Another 27 words (2 lines of text) are included under the topic Early Gillan Notables in all our PDF Extended History products and printed products wherever possible.

In the United States, the name Gillan is the 16,533rd most popular surname with an estimated 2,487 people with that name. [2]

Migration of the Gillan family to Ireland

Some of the Gillan family moved to Ireland, but this topic is not covered in this excerpt.
Another 127 words (9 lines of text) about their life in Ireland is included in all our PDF Extended History products and printed products wherever possible.

Gillan migration to the United States +

Gillan Settlers in United States in the 18th Century

Gillan Settlers in United States in the 19th Century

Gillan Settlers in Canada in the 19th Century

Gillan Settlers in Australia in the 19th Century

Gillan Settlers in New Zealand in the 19th Century

Historic Events for the Gillan family +