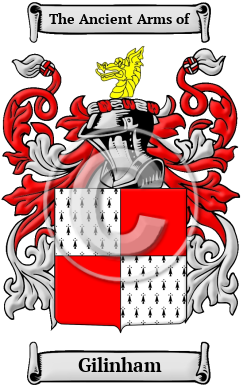 The name Gilinham was brought to England by the Normans when they conquered the country in 1066. The ancestors of the Gilinham family lived the Old French given name Guillaume. The name Guillaume was modified into two forms after arriving in England: Gillham; from which Gillingham derives; and William. Alternatively, the name could have been a local name as "of Gillingham." In this case, there are three parishes so named in England: a parish in Norfolk, near Beccles; a parish in Dorset, near Shaftesbury; a parish in Kent, near Chatham. [1]

Early Origins of the Gilinham family

The surname Gilinham was first found in Dorset, Norfolk, and in Kent. The Hundredorum Rolls of 1273 list: Gild de Gillingham in Dorset and Robert de Gyllingham in Norfolk. During the reign of Edward I., Hugh de Gillingham was found in Kent and Robert de Gillingham was found in Norfolk. Richard de Gillyngham, was listed in Somerset, during the reign of Edward III. [1] Another source claims the Dorset local was the original. "The Gillinghams evidently derive their name from the Dorset town thus called." [2] We will take a moment to discuss the ancient history of Gillingham, Kent. "This ancient village, which is recorded in Domesday Book by the name of Gelingeham, was much exposed to the ravages of the Danes; and it is said that 600 noblemen, who landed here in the retinue of Alfred and Edward, were murdered upon the spot, by Earl Godwin. Charles I. erected a fort for the protection of the royal dockyard and navy, which, proving ineffectual to resist the Dutch in their celebrated expedition up the river, in 1667, was subsequently enlarged, and distinguished by the name of Gillingham Castle. The church was formerly remarkable for what was deemed a miraculous image of the Virgin, called 'Our Lady of Gillingham,' in a niche over the western door, to which frequent pilgrimages were made." [3]

Early History of the Gilinham family

It is only in the last few hundred years that the English language has been standardized. For that reason, Anglo-Norman surnames like Gilinham are characterized by many spelling variations. Scribes and monks in the Middle Ages spelled names they sounded, so it is common to find several variations that refer to a single person. As the English language changed and incorporated elements of other European languages such as Norman French and Latin, even literate people regularly changed the spelling of their names. The variations of the name Gilinham include Gillingham, Gillam, Gwilliams, Gilham and others.

Outstanding amongst the family at this time was Francis Dillingham ( fl. 1611), was an English divine, a native of Dean, Bedfordshire (1625). He was one of the translators of the authorised version of the Bible (1611). [4] Theophilus Dillingham (1613-1678), was an English churchman and academic, Master of Clare Hall, Cambridge...
Another 50 words (4 lines of text) are included under the topic Early Gilinham Notables in all our PDF Extended History products and printed products wherever possible.

Migration of the Gilinham family

Faced with the chaos present in England at that time, many English families looked towards the open frontiers of the New World with its opportunities to escape oppression and starvation. People migrated to North America, as well as Australia and Ireland in droves, paying exorbitant rates for passages in cramped, unsafe ships. Many of the settlers did not make the long passage alive, but those who did see the shores of North America were welcomed with great opportunity. Many of the families that came from England went on to make essential contributions to the emerging nations of Canada and the United States. Some of the first immigrants to cross the Atlantic and come to North America carried the name Gilinham, or a variant listed above: John Gilham who settled in Barbados in 1680; Susan Gilham settled in Jamaica in 1661; Joseph Gilham settled in Virginia in 1738; Benjamin Gillam settled in Boston in 1630.