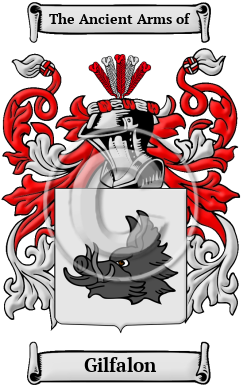 The history of the Gilfalon family begins among the Pictish clans ancient Scotland. The name Gilfalon comes from the Gaelic name Gille Fhaolain, which means servant of St. Fillan. Patronymic names often substituted the name of a saint or other revered religious figure in place of a devout bearer's actual father.

Early Origins of the Gilfalon family

The surname Gilfalon was first found in Fife, where "several individuals bearing this name appear in Scots records in the twelfth and thirteenth centuries. In the last quarter of the twelfth century Gillefali Kelde (i.e. a Culdee) witnessed a grant by Turpin, bishop of Brechin, of a toft of Strukatherach to the Abbey of Arnbroath. Gillefalyn held land in Lauderdale, c. 1213-1214. Gilfelan Mac Guostuf witnessed a charter by Maldoune, 3d earl of Levenax, 1217 and about 1213-1214 Gilfalyn possessed part of Vlfkelystun, now Oxton, in Lauderdale." [1]

Early History of the Gilfalon family

Notable amongst the Clan at this time was Robert Gilfillan (1798-1850), Scotttish poet, born 7 July 1798 at Dunfermline and was the son of a master weaver. " In 1811, on the removal of the family to Leith, Gilfillan was there apprenticed to a cooper, whom he served, with a somewhat languid interest, for seven years. For three years after 1818 he...
Another 62 words (4 lines of text) are included under the topic Early Gilfalon Notables in all our PDF Extended History products and printed products wherever possible.

Migration of the Gilfalon family

Faced by this persecution and the generally unstable political climate of those days, many Scots chose to leave their homeland for Ireland, Australia, and North America in search of greater opportunity and freedom. The colonies across the Atlantic were the most popular choice, but a passage there was neither cheap nor easily suffered. Passengers arrived sick and poor, but those who made it intact often found land and more tolerant societies in which to live. These brave settlers formed the backbone of the burgeoning nations of Canada and the United States. It is only this century that the ancestors of these families have begun to recover their collective identity through the patriotic highland games and Clan societies that have sprung up throughout North America. Research into early immigration and passenger lists revealed many immigrants bearing the name Gilfalon: John Gilfillan who settled in New Jersey in 1685; another John arrived in Philadelphia in 1832; others in 1856, 1863, 1866, and 1868; Robert and Thomas also arrived in the same port..