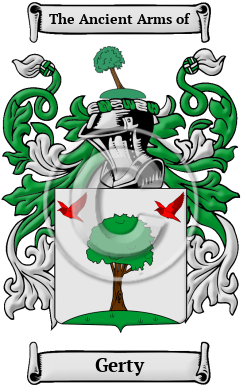 The Irish name Gerty was originally written in a Gaelic form as Mag Oireachtaigh, which is derived from the word "oireachtach," referring to a member of an assembly. Translating the name into English produces no less than seventeen different synonyms. But the origin of the name is most intriguing. In the 12th century, the name was simply O Roduibh but a Oireachtach O Roduibh at that time caused the name to be shortened to Oireachtach, their present form.

Early Origins of the Gerty family

The surname Gerty was first found in counties Roscommon and Galway (Irish: Gaillimh) part of the province of Connacht, located on the west coast of the Island, where they were one of the Hi Maine Septs in Kelly's country. They were direct descendants of the O'Connors, Kings of Connacht, and the Chief of the Clann was one of the four royal chiefs under the O'Connor. The tree on the Coat of Arms illustrates their descendancy from the O'Connors.

Early History of the Gerty family

This web page shows only a small excerpt of our Gerty research. Another 78 words (6 lines of text) covering the years 1300, 1585, 1744 and 1598 are included under the topic Early Gerty History in all our PDF Extended History products and printed products wherever possible.

Pronunciation, rather than spelling, guided the early scribes and church officials in recording names. This process of estimation often produced to the misleading result of one person's name being recorded under several different spellings. Numerous spelling variations of the surname Gerty are preserved in documents of the family history. The various spellings of that name included Gerrity, Gerty, Gerighty, Gerighaty, Gerety, Gerahty, Garraty, Geraty, Jerety, McGerity, MacGeraghty, MacGartie, MacGarty and many more.

Another 29 words (2 lines of text) are included under the topic Early Gerty Notables in all our PDF Extended History products and printed products wherever possible.

Gerty migration to the United States +

During the late 18th and 19th centuries hundreds, of thousands of Irish left their homeland for North American shores. The earlier settlers left for the promise of free land or to participate in the development of what was seen as a new land. This pattern of immigration continued for many years, growing at a slow but steady pace. The 1840s, however, forever disrupted this pattern. In that decade, Ireland experienced an unprecedented plague of disease, starvation, and death, all of which were produced by the failure of the island's potato crop. That decade alone the numbers of people leaving the island rivaled all of the previous years of Irish immigration combined. When these large immigrants hit North American shores they unfortunately encountered more discrimination from the established population. They were, however, very warmly received by industrialists and those with a passion for nation building. The former saw the Irish as a cheap source of labor required for the extraction of coal and lumber, and the manufacture of products, the latter regarded them as a means to occupy the west and to construct the essential bridges, railways, canals, and roadways required by an industrialized nation. Whenever and however the Irish arrived in North America, they were instrumental to the development of what would become the great nations of the United States and Canada. Immigration and passenger lists have shown many early immigrants bearing the old Irish name of Gerty:

Gerty Settlers in United States in the 19th Century