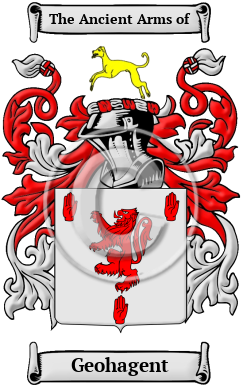 The original Gaelic form of the Geohagent surname is Mag Eochagain, a patronymic derived from the personal name Eochaidh.

Early Origins of the Geohagent family

The surname Geohagent was first found in the county of Westmeath (Irish: An Iarmhí) in the Irish Midlands, province of Leinster, in the barony of Moycashel at Kilbeggan where they held a family seat from ancient times. Traditionally, the Geohagents are said to descend from Fiacha, son of Niall of the Nine Hostages.

Early History of the Geohagent family

During the Middle Ages, a standardized literary language known by the general population of Ireland was a thing of fiction. When a person's name was recorded by one of the few literate scribes, it was up that particular scribe to decide how to spell an individual's name. So a person could have several spelling variations of his name recorded during a single lifetime. Research into the name Geohagent revealed many variations, including Geoghegan, Gagahan, Gahagan, Gahaghan, Gaghan, Gegan, MacGeoghegan, Geohan and many more.

Prominent amongst the family at this time was Conal MacGeoghegan (circa 1580-1650) Chief of the sept MacGeoghegan, historian who translated the Annals of Clonmacnoise; James MacGeoghegan (1702-1763) of Westmeath, an ordained priest in Paris, who wrote a "History of Ireland;" and Edward Geoghegan of Dublin was one of the most eminent surgeons of his time (early 1800s). Usher Gagahan (d. 1749), was an Irish classical scholar, belonged to a good family of Westmeath, Ireland; was educated at Trinity College, Dublin, but took...
Another 80 words (6 lines of text) are included under the topic Early Geohagent Notables in all our PDF Extended History products and printed products wherever possible.

Migration of the Geohagent family

Ireland saw an enormous decrease in its population in the 19th century due to immigration and death. This pattern of immigration began slowly in the late 18th century and gradually grew throughout the early portion of the 19th century. However, a dramatic increase in the country's immigration numbers occurred when the Great Potato Famine struck in the 1840s. The early immigrants to North America were primarily destined to be farmers tending to their own plot of land, those that came later initially settled within pre-established urban centers. These urban immigrants provided the cheap labor that the fast developing United States and soon to be Canada required. Regardless of their new lifestyle in North America, the Irish immigrants to the United States and Canada made invaluable contributions to their newly adopted societies. An investigation of immigrant and passenger lists revealed many Geohagents: Michael Geoghegan, a Scotch-Irish who arrived in Boston in 1737; Edward Geoghegan, who came to Philadelphia in 1741; John McGeogh, who arrived in America in 1742.