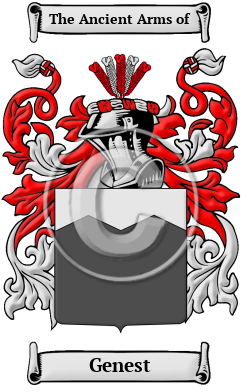 Early Origins of the Genest family

The surname Genest was first found in Languedoc, where they held a family seat from ancient times.

Early History of the Genest family

Notable amongst the family name at this time was Charles-Claude Genest (1639-1719), a French clergyman, poet and playwright from Paris. Eleazar Genet, also called Carpentras, after the French town in which he was born, was priest, singer, and composer, attached to the papal court in the time of Leo X. He was made a bishop in 1518, and was soon afterwards sent by the Pope on a mission to Avignon, where he seems to have spent the rest of his life. He once revisited Rome, and during his stay there his 'Lamentations' for Holy Week were performed by his former colleagues. Struck...
Another 110 words (8 lines of text) are included under the topic Early Genest Notables in all our PDF Extended History products and printed products wherever possible.

Genest migration to the United States +

Genest Settlers in United States in the 18th Century

Genest Settlers in Canada in the 17th Century

Genest Settlers in Canada in the 18th Century