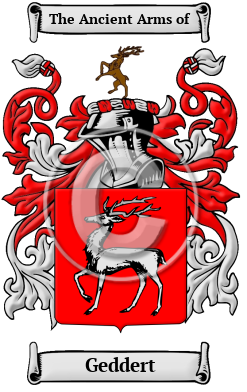 Early Origins of the Geddert family

The surname Geddert was first found in Silesia, where this family name dates back to at least the 9th century. The name is derived from the Old High German elements "geb" which means "gift" and "hard" meaning "brave, hardy." One of the first records of the name was Gebhard of Lahngau (c. 860-910) of the Conradine dynasty, son of Odo (died 879) who was Duke of Lotharingia (903-910.) A few years later, Saint Gebhard (949-995) was a bishop of Constance (979-995) and founded the Benedictine abbey of Petershausen in 983.

Early History of the Geddert family

Notables of the period with the surname Geddert were Gebhard I (died 1023), known as Gebhard of Swabia, Bishop of Regensburg from 994 to 1023. He achieved fame for his generosity to the poor Black Forest farmers around 990 A.D. He was succeeded by Gebhard II, called Gebhard von Hohenwart, who was the bishop of Regensburg (or Ratisbon) from 1023 to 1036. His son, Gebhard III, called...
Another 66 words (5 lines of text) are included under the topic Early Geddert Notables in all our PDF Extended History products and printed products wherever possible.

Geddert migration to the United States +

Geddert Settlers in United States in the 19th Century