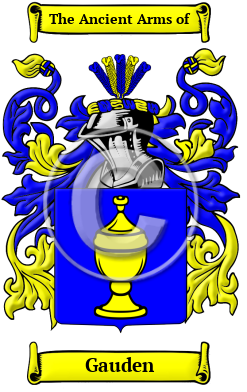 In the medieval era, many new names came to France. Gauden originated during that time in the province of Forez. Gauden was derived from the personal name Godwine, which means good protector.

Early Origins of the Gauden family

The surname Gauden was first found in Forez, a former province of France, now part of the modern Loire department, the Haute-Loire and Puy-de-Dôme départements, where the noble family held a family seat from ancient times.

One of the first recordings of this ancient family occurs in 1584 when Pierre and Marguerite, the children of Jean, were involved in a proceeding with Jean Godin and Yves de Lus. Many members of this celebrated family were involved in the events of the times, such as, during the French Revolution, François Joseph Louis Godin, Baron of Godin, who was elected as a Deputy of Dyle to the Conseil des Anciens (council founded 1795 of men over 40 to weight decisions of the Assembly). Another important member of the family, Jean-Baptiste Godin, was a French politician and industrialist during the 1800's.

Charles Godin, born in 1631, son of Jacques and Marguerite of St.Laurent in Dauphine, travelled to Canada in the 17th century. After arriving in the province of Quebec he married Marie Boucher, daughter of Marin and Perinne, on 6th November 1656. They settled together in Quebec and had eighteen children to carry on the Godin name. [1]

Early History of the Gauden family

This web page shows only a small excerpt of our Gauden research. More information is included under the topic Early Gauden History in all our PDF Extended History products and printed products wherever possible.

Another 32 words (2 lines of text) are included under the topic Early Gauden Notables in all our PDF Extended History products and printed products wherever possible.

Gauden migration to the United States +

Gauden Settlers in United States in the 17th Century