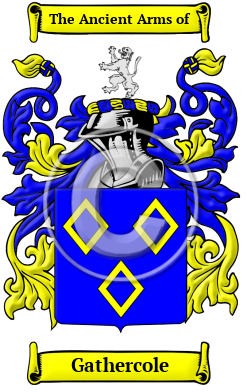 The ancestors of the name Gathercole date back to the days of the Anglo-Saxon tribes of Britain. The name is derived from their residence in or near the settlement of Catteral, which is located between Preston and Garstang in the county of Lancashire. The Domesday Book of 1086 lists this place as Catrehala. [1]

Some experts also suggest that the surname Gathercole may be derived from a pet form of the name Caterin; this is a form of the personal name Catharine which became popular following its importation in the 12th century.

Early Origins of the Gathercole family

The surname Gathercole was first found in Lancashire at Catteral, a township, in the parish and union of Garstang, hundred of Amounderness. "The family of Catteral were in possession of this place for a considerable period; from them it passed by marriage to the Sherburnes, and subsequently came to the Banisters, Winckleys, and others." [2]

Early rolls for the family include: Robert de Caterell in the Curia Regis Rolls for Hampshire in 1222; John de Caterhale in the Subsidy Rolls for Lancashire in 1332; Lawrence Cattrall in Yorkshire in 1462; Richard Caterall, a Freeman of York in 1500 and William Katerel in the Assize Rolls for Staffordshire in 1203. [3]

The Lay Subsidy Rolls include an entry for Lorade Caterhale, Lancashire, 1332. [4]

"The Catteralls, who are now represented in Preston, derive their name from a Lancashire township. Henry Catterall was guild - mayor of Preston in 1602. In the list of Lancashire Roman Catholics registered after the rebellion of 1715 occurs the name of Catterall, a small estate - holder." [5]

Early History of the Gathercole family

This web page shows only a small excerpt of our Gathercole research. Another 96 words (7 lines of text) covering the years 1562 and 1593 are included under the topic Early Gathercole History in all our PDF Extended History products and printed products wherever possible.

Gathercole has been spelled many different ways. Before English spelling became standardized over the last few hundred years, spelling variations in names were a common occurrence. As the English language changed in the Middle Ages, absorbing pieces of Latin and French, as well as other languages, the spelling of people's names also changed considerably, even over a single lifetime. Many variations of the name Gathercole have been found, including Catterall, Caterell, Catterale, Catterell, Caterale, Cathrell, Catheral, Catherey, Kitrell and many more.

More information is included under the topic Early Gathercole Notables in all our PDF Extended History products and printed products wherever possible.

Gathercole Settlers in Australia in the 19th Century