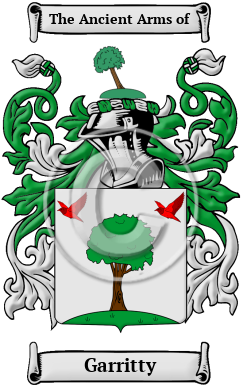 The Irish name Garritty was originally written in a Gaelic form as Mag Oireachtaigh, which is derived from the word "oireachtach," referring to a member of an assembly. Translating the name into English produces no less than seventeen different synonyms. But the origin of the name is most intriguing. In the 12th century, the name was simply O Roduibh but a Oireachtach O Roduibh at that time caused the name to be shortened to Oireachtach, their present form.

Early Origins of the Garritty family

The surname Garritty was first found in counties Roscommon and Galway (Irish: Gaillimh) part of the province of Connacht, located on the west coast of the Island, where they were one of the Hi Maine Septs in Kelly's country. They were direct descendants of the O'Connors, Kings of Connacht, and the Chief of the Clann was one of the four royal chiefs under the O'Connor. The tree on the Coat of Arms illustrates their descendancy from the O'Connors.

Early History of the Garritty family

This web page shows only a small excerpt of our Garritty research. Another 78 words (6 lines of text) covering the years 1300, 1585, 1744 and 1598 are included under the topic Early Garritty History in all our PDF Extended History products and printed products wherever possible.

The recording of names in Ireland during the Middle Ages was an inconsistent endeavor at best. Since the general population did not know how to read or write, they could only specify how their names should be recorded orally. Research into the name Garritty revealed spelling variations, including Gerrity, Gerty, Gerighty, Gerighaty, Gerety, Gerahty, Garraty, Geraty, Jerety, McGerity, MacGeraghty, MacGartie, MacGarty and many more.

Another 29 words (2 lines of text) are included under the topic Early Garritty Notables in all our PDF Extended History products and printed products wherever possible.

Migration of the Garritty family

Ireland became inhospitable for many native Irish families in the 19th centuries. Poverty, lack of opportunities, high rents, and discrimination forced thousands to leave the island for North America. The largest exodus of Irish settlers occurred with the Great Potato Famine of the late 1840s. For these immigrants the journey to British North America and the United States was long and dangerous and many did not live to see the shores of those new lands. Those who did make it were essential to the development of what would become two of the wealthiest and most powerful nations of the world. These Irish immigrants were not only important for peopling the new settlements and cities, they also provided the manpower needed for the many industrial and agricultural projects so essential to these growing nations. Immigration and passenger lists have documented the arrival of various people bearing the name Garritty to North America: Robert Gerity who arrived in Philadelphia, Pennsylvania in 1858; Patrick Gerrity, also Peter and Phillip, all arrived in the 1860's; Sally McGarty arrived in New York State in 1847.