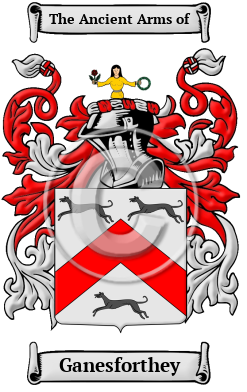 The ancient history of the Ganesforthey name begins with the ancient Anglo-Saxon tribes of Britain. The name is derived from when the family resided in the region of Gaye which was located in France. The surname Ganesforthey was also a nickname which described someone with a happy or light spirited character.

Early Origins of the Ganesforthey family

The surname Ganesforthey was first found in Durham at Gainford, a parish, in the unions of Teesdale, Darlington, and Auckland. "This place was anciently a seigniory detached from the palatinate jurisdiction of the county, and invested with several valuable privileges and immunities. It appears to have been indebted for its origin to Egfrid, Bishop of Lindisfarne, who founded a church, which in 830 he gave to the see, together with the lands annexed to it, and which continued to form part of the episcopal possessions till the commencement of the 11th century." [1]

Early History of the Ganesforthey family

This web page shows only a small excerpt of our Ganesforthey research. Another 115 words (8 lines of text) covering the years 1624, 1599, 1601 and 1610 are included under the topic Early Ganesforthey History in all our PDF Extended History products and printed products wherever possible.

Until quite recently, the English language has lacked a definite system of spelling rules. Consequently, Anglo-Saxon surnames are characterized by a multitude of spelling variations. Changes in Anglo-Saxon names were influenced by the evolution of the English language, as it incorporated elements of French, Latin, and other languages. Although Medieval scribes and church officials recorded names as they sounded, so it is common to find one person referred to by several different spellings of his surname, even the most literate people varied the spelling of their own names. Variations of the name Ganesforthey include Gainsford, Gaynesford, Gainford, Gaynsford, Ganesford and many more.

Distinguished members of the family include Thomas Gainsford (d. 1624?), English author who belonged to the Surrey family of Gainsford. "He with Edward Stene apparently purchased of the crown Alne manor, Warwickshire, and a cottage in Stutton, Yorkshire, 27 Nov. 1599. He is known to have served in Ireland under Richard...
Another 51 words (4 lines of text) are included under the topic Early Ganesforthey Notables in all our PDF Extended History products and printed products wherever possible.

Migration of the Ganesforthey family

Searching for a better life, many English families migrated to British colonies. Unfortunately, the majority of them traveled under extremely harsh conditions: overcrowding on the ships caused the majority of the immigrants to arrive diseased, famished, and destitute from the long journey across the ocean. For those families that arrived safely, modest prosperity was attainable, and many went on to make invaluable contributions to the development of the cultures of the new colonies. Research into the origins of individual families in North America revealed records of the immigration of a number of people bearing the name Ganesforthey or a variant listed above: Mathias Gainsford who settled in Maryland in 1774 and Arthur Gainsford, who settled in Pennsylvania in 1876.