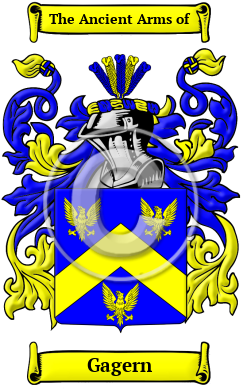 Early Origins of the Gagern family

The surname Gagern was first found in Normandy (French: Normandie), the former Duchy of Normandy, where the family has been a prominent family for centuries, and held a family seat with lands and manor. The family were well established in the region of Calvados and several members of the family distinguished themselves through their contributions toward the community in which they lived and were rewarded with lands, titles, and letters patent confirming their nobility. The name is derived from the occupational name for a player on the fiddle, from the word "geige" meaning "fiddle."

Early History of the Gagern family

Notable amongst the family in this period was William Gager (1555-1622), an English jurist, now known for his Latin dramas. He was a nephew of Sir William Cordell, Master of the Rolls. " He proceeded B.A. 4 Dec. 1577, M.A. 5 June 1580, and B.C.L. and D.C.L. 30 June 1589 (Oxford Univ. Reg., Oxford Hist. Soc., ii. iii. 70). Gager soon proved a facile Latin verse writer, and wrote a...
Another 70 words (5 lines of text) are included under the topic Early Gagern Notables in all our PDF Extended History products and printed products wherever possible.

Migration of the Gagern family