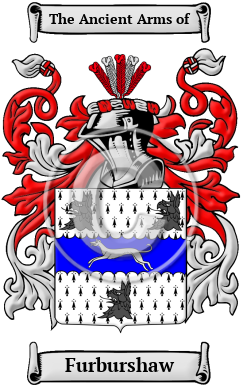 Early Origins of the Furburshaw family

The surname Furburshaw was first found in Shropshire where the "surname is derived from an occupation. 'the furber' or 'furbisher.' A furbisher or scourer of armour and metals generally, found also as' furbearer.' Frobisher is the most prominent modern form of the surname." [1]

"French fourhisseur, an artizan who polishes and mounts swords; a sword cutler." [2]

The first record of the family was found in Leicestershire where Geoffrey le Furbisur held estates c. 1260. A few years later, Henry le Fourbissor was listed in Shropshire in 1306 and later, Richard Forbour, Forbysschour was listed in Colchester, Essex 1359-60. [3]

The famed navigator Sir Martin Frobisher (1535?-1594), belonged to a family of Welsh origin, which moved from Chirk in Denbighshire. [4]

Early History of the Furburshaw family

Distinguished members of the family include Sir Martin Frobisher (c. 1535-1594), English seaman and privateer who made three voyages to the Canadian Arctic (1576, 1577, and 1578) in search of the Northwest Passage. All landed in northeastern Canada, around today's Resolution Island and Frobisher Bay...
Another 44 words (3 lines of text) are included under the topic Early Furburshaw Notables in all our PDF Extended History products and printed products wherever possible.

Migration of the Furburshaw family

To escape oppression and starvation at that time, many English families left for the "open frontiers" of the New World with all its perceived opportunities. In droves people migrated to the many British colonies, those in North America in particular, paying high rates for passages in cramped, unsafe ships. Although many of the settlers did not make the long passage alive, those who did see the shores of North America perceived great opportunities before them. Many of the families that came from England went on to make essential contributions to the emerging nations of Canada and the United States. Research into various historical records revealed some of first members of the Furburshaw family emigrate to North America: settlers, who arrived along the eastern seaboard, from Newfoundland, to Maine, to Virginia, the Carolinas, and to the islands.