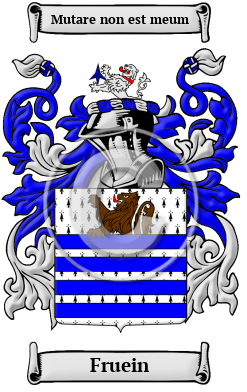 The name Fruein was spawned by the ancient Anglo-Saxon culture that ruled a majority of Britain. It comes from a baptismal nameFrewen. Baptismal names began to appear as surnames relatively late in the growth of the naming tradition. This is a little surprising, given the popularity of biblical figures in the Christian countries of Europe. Nevertheless, surnames derived from baptismal names grew in popularity during the Middle Ages, and have become one of the foremost sources for surnames.

Early Origins of the Fruein family

The surname Fruein was first found in the Hundredorum Rolls of 1273 where William Frewyn, Sussex; and Ralph Frewyne, Oxfordshire were both listed as holding at that time. [1]

Early History of the Fruein family

Fruein has been spelled many different ways. Before English spelling became standardized over the last few hundred years, spelling variations in names were a common occurrence. As the English language changed in the Middle Ages, absorbing pieces of Latin and French, as well as other languages, the spelling of people's names also changed considerably, even over a single lifetime. Many variations of the name Fruein have been found, including Frewen, Frewin, Frewyn and others.

Distinguished members of the family include John Frewen (1558-1628), English Puritan divine, descended from an old Worcestershire family, was born in 1558. [3] Accepted Frewen (1588-1664), was Archbishop of York, born in Sussex and became a fellow of Oxford in 1612. He "was the eldest son of the Rev. John Frewen [q. v.], rector of Northiam, Sussex. The family appears to have been originally of Worcestershire, as Richard Frewen, the father of John Frewen, was son of Roger Frewen, who was buried at Hanley Castle in 1543, and grandson of Richard Frewen, bailiff of Worcester in 1473. Accepted Frewen was born at...
Another 109 words (8 lines of text) are included under the topic Early Fruein Notables in all our PDF Extended History products and printed products wherever possible.

Migration of the Fruein family to Ireland

Some of the Fruein family moved to Ireland, but this topic is not covered in this excerpt.
Another 53 words (4 lines of text) about their life in Ireland is included in all our PDF Extended History products and printed products wherever possible.

Migration of the Fruein family

In an attempt to escape the chaos experienced in England, many English families boarded overcrowded and diseased ships sailing for the shores of North America and other British colonies. Those families hardy enough, and lucky enough, to make the passage intact were rewarded with land and a social environment less prone to religious and political persecution. Many of these families became important contributors to the young colonies in which they settled. Early immigration and passenger lists have documented some of the first Frueins to arrive on North American shores: William Frewen who settled in Boston Massachusetts in 1716; Patrick and John Frewen arrived in Philadelphia, Pennsylvania in 1866; Thomas and Mary Frewin arrived in Philadelphia in 1774..