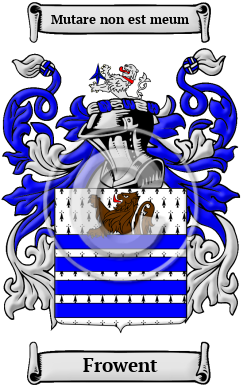 The Frowent name is an important part of the history of the ancient Anglo-Saxon tribes of Britain. Frowent is derived from a baptismal nameFrewen. Baptismal names began to appear as surnames relatively late in the growth of the naming tradition. This is a little surprising, given the popularity of biblical figures in the Christian countries of Europe. Nevertheless, surnames derived from baptismal names grew in popularity during the Middle Ages, and have become one of the foremost sources for surnames.

Early Origins of the Frowent family

The surname Frowent was first found in the Hundredorum Rolls of 1273 where William Frewyn, Sussex; and Ralph Frewyne, Oxfordshire were both listed as holding at that time. [1]

Early History of the Frowent family

Before the last few hundred years, the English language had no fast system of spelling rules. For that reason, spelling variations are commonly found in early Anglo-Saxon surnames. Over the years, many variations of the name Frowent were recorded, including Frewen, Frewin, Frewyn and others.

Distinguished members of the family include John Frewen (1558-1628), English Puritan divine, descended from an old Worcestershire family, was born in 1558. [3] Accepted Frewen (1588-1664), was Archbishop of York, born in Sussex and became a fellow of Oxford in 1612. He "was the eldest son of the Rev. John Frewen [q. v.], rector of Northiam, Sussex. The family appears to have been originally of Worcestershire, as Richard Frewen, the father of John Frewen, was son of Roger Frewen, who was buried at Hanley Castle in 1543, and grandson of Richard Frewen, bailiff of Worcester in 1473. Accepted Frewen was born at...
Another 109 words (8 lines of text) are included under the topic Early Frowent Notables in all our PDF Extended History products and printed products wherever possible.

Migration of the Frowent family to Ireland

Some of the Frowent family moved to Ireland, but this topic is not covered in this excerpt.
Another 53 words (4 lines of text) about their life in Ireland is included in all our PDF Extended History products and printed products wherever possible.

Migration of the Frowent family

To escape oppression and starvation at that time, many English families left for the "open frontiers" of the New World with all its perceived opportunities. In droves people migrated to the many British colonies, those in North America in particular, paying high rates for passages in cramped, unsafe ships. Although many of the settlers did not make the long passage alive, those who did see the shores of North America perceived great opportunities before them. Many of the families that came from England went on to make essential contributions to the emerging nations of Canada and the United States. Research into various historical records revealed some of first members of the Frowent family emigrate to North America: William Frewen who settled in Boston Massachusetts in 1716; Patrick and John Frewen arrived in Philadelphia, Pennsylvania in 1866; Thomas and Mary Frewin arrived in Philadelphia in 1774..