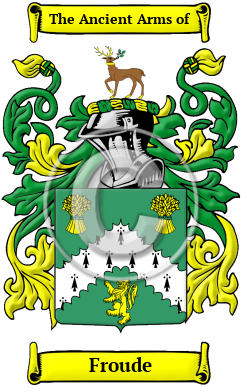 Early Origins of the Froude family

The surname Froude was first found in Devon, where Richard and Siward Frode were listed in the Pipe Rolls of 1184. [1]

The Domesday Book has an entry for Frodo liber homo, who was living at Bury St. Edmunds, and whose son is documented as Gilbert filius Frodonis or Fit-Froude. [2]

Hugh filius Frodonis was also listed at Bury St. Edmunds, Suffolk 1121-1148. William Froud was listed in Cheshire c. 1203 and later William le Frode was listed in the Subsidy Rolls for Kent in 1334. [1]

Early History of the Froude family

A multitude of spelling variations characterize Norman surnames. Many variations occurred because Old and Middle English lacked any definite spelling rules. The introduction of Norman French to England also had a pronounced effect, as did the court languages of Latin and French. Therefore, one person was often referred to by several different spellings in a single lifetime. The various spellings include Froud, Froude, Frowd, Frowde, Frude, Frood and others.

Outstanding amongst the family at this time was Sir Phillip Froude, who is mentioned in the House of Commons Journal of February, 1667 as being "intrusted with the Management of the Post Office." Another source indirectly confirms this latter claim when Philip Frowde (d. 1738), the English poet, "was the son of Philip Frowde, deputy postmaster-general from 1678 to 1688. His grandfather, Colonel Philip Frowde, for his faithful adherence to Charles I and Charles II was knighted on 10 March 1664-1665...
Another 80 words (6 lines of text) are included under the topic Early Froude Notables in all our PDF Extended History products and printed products wherever possible.

In Newfoundland, Canada, the name Froude is the 606th most popular surname with an estimated 75 people with that name. [3]

Froude Settlers in New Zealand in the 19th Century