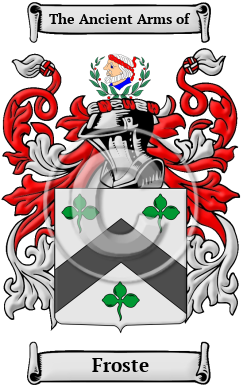 The origins of the Anglo-Saxon name Froste come from its first bearer, who was a person who was the Descendant of Frost (one born at the time of frost.) [1]

"Frost is the name of a dwarf in the Scandinavian mythology, and our nursery hero, 'Jack Frost,' may be derived from that source." [2]

Fancifully and less likely, it could have been a nickname for someone thought of as having a cold attitude or and icy disposition or a person may have also received this surname because of his white hair or his white beard.

Early Origins of the Froste family

The surname Froste was first found in Hampshire where William Forst was recorded in the Domesday Book in 1086. From this earliest record, we found about ten years later, Gilbert Frost c. 1095 in Suffolk. [3]

"The name of Frost has been established in Norfolk ever since the 13th century, when the Frosts resided here in numbers. In the 15th and 16th centuries Frost was a common name amongst the Norfolk clerics. The name also occurs now in other parts of England, particularly in Derbyshire and Somerset. In the 13th century it not only characterized Norfolk but also Cambridgeshire and in a less degree Suffolk." [4]

The Hundredorum Rolls of 1273 included: Henry Frost, Norfolk; and Robert Frost, Lincolnshire. The Yorkshire Poll Tax Rolls of 1379 listed: Johannes Froste; and Dionisius Frost 1370 as both holding lands there at that time. [5]

The famed poet Robert Frost (1874-1963), who received four Pulitzer Prizes for Poetry was born in California, but his father descended from Nicholas Frost of Tiverton, Devon who had sailed to New Hampshire in 1634 on the Wolfrana.

Early History of the Froste family

The first dictionaries that appeared in the last few hundred years did much to standardize the English language. Before that time, spelling variations in names were a common occurrence. The language was changing, incorporating pieces of other languages, and the spelling of names changed with it. Froste has been spelled many different ways, including Frost, Froste and others.

Notables of the family at this time include John Frost (1626?-1656), English nonconformist divine, born at Langham, Suffolk, in or about 1626, was the eldest son of John Frost, rector of Fakenham in the same county. "After attending schools at Thetford, Norfolk, and Bury St. Edmunds, Suffolk, he was admitted pensioner of St. John's College, Cambridge, 21 Feb. 1641-2, and fellow soon after taking his B.A. degree." [6] John Frost (1750-1842), Secretary of the Corresponding...
Another 73 words (5 lines of text) are included under the topic Early Froste Notables in all our PDF Extended History products and printed products wherever possible.

Migration of the Froste family to Ireland

Some of the Froste family moved to Ireland, but this topic is not covered in this excerpt. More information about their life in Ireland is included in all our PDF Extended History products and printed products wherever possible.

Froste migration to the United States +

Thousands of English families in this era began to emigrate the New World in search of land and freedom from religious and political persecution. Although the passage was expensive and the ships were dark, crowded, and unsafe, those who made the voyage safely were rewarded with opportunities unavailable to them in their homeland. Research into passenger and immigration lists has revealed some of the very first Frostes to arrive in North America:

Froste Settlers in United States in the 17th Century