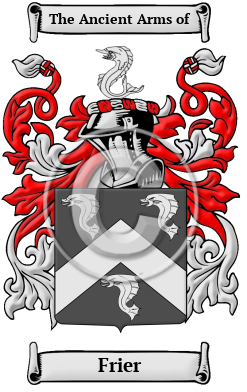 The distinguished surname Frier emerged among the industrious people of Flanders, which was an important trading partner and political ally of Britain during the Middle Ages. As a result of the frequent commercial intercourse between the Flemish and English nations, many Flemish migrants settled in Britain. In early times, people were known by only a single name. However, as the population grew and people traveled further afield, it became increasingly necessary to assume an additional name to differentiate between bearers of the same personal name. Occupational surnames were derived from the common trades of the medieval era. The surname Frier is an occupational name for a friar. The surname Frier is derived from the Old French word frere, which means friar. [1] [2]

Early Origins of the Frier family

The surname Frier was first found in the Hundredorum Rolls of 1273 which listed: Benedictus le Frere, Cambridgeshire; and John le Frere, Norfolk. [3] Over in Somerset, Cecylia le Frere, was listed there 1 Edward III (during the first year of King Edward III's reign.) [4]

Early History of the Frier family

Prominent in the family at this time was John Fryer (d. 1563), English physician, born at Balsham, Cambridgeshire, educated at Eton and elected thence to King's College, Cambridge, in 1517. "He graduated B.A. in 1521 and M.A. in 1525. On 5 Nov. 1525 he was incorporated at Oxford, being one of three masters of arts who had been preferred to Cardinal Wolsey's college in that university." [7] John Fryer ( fl. 1571), the English physician, who has been erroneously described as the son of John Fryer, M.D. (d. 1563) [q. v.], was born at Godmanchester, Huntingdonshire, and educated at Cambridge...
Another 98 words (7 lines of text) are included under the topic Early Frier Notables in all our PDF Extended History products and printed products wherever possible.

Frier migration to the United States +

Investigation of immigration and passenger lists has revealed a number of people bearing the name Frier:

Frier Settlers in United States in the 17th Century

Frier Settlers in United States in the 18th Century

Frier Settlers in United States in the 19th Century

Frier Settlers in Australia in the 19th Century