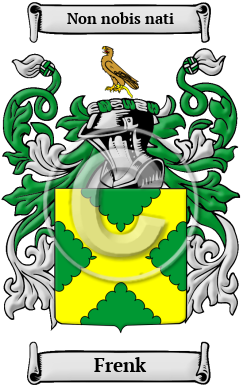 The origins of the Anglo-Saxon name Frenk come from its first bearer, who was a person who was referred to as being free or generous. The surname was originally derived from the Old French franc, which meant "liberal, generous." In this case, the name would have been initially bestowed as a nickname either on someone who was generous or in an ironic way on someone who was stingy. The surname also has origins from the Norman official title, the frank which also means free. To confuse matters more, the surname could have been derived from the Norman personal name "Franc," which was originally an ethnic name for one of Frankish race.

Early Origins of the Frenk family

The surname Frenk was first found in the Domesday Book where bearers of the name Frenk were granted lands in Shropshire, Yorkshire, Norfolk, and Surrey. The name appears with some frequency in various counties between the 11th and 14th centuries; early bearers of the name include Ricardus filius Franke, who was living in London in 1188, and Ricardus Franc, who was listed in the Curia Regis Rolls of Essex in 1201. [1]

Early History of the Frenk family

The first dictionaries that appeared in the last few hundred years did much to standardize the English language. Before that time, spelling variations in names were a common occurrence. The language was changing, incorporating pieces of other languages, and the spelling of names changed with it. Frenk has been spelled many different ways, including Frank, Franks, Franke, Frankes, Frenk, Frink and many more.

Notables of the family at this time include Mark Frank (1613-1664), a British theologian, Master of Pembroke College, Cambridge; John Frank (c.1640), a British bookseller; Calvin Frink (c.1775), a British army surgeon; and Richard Franck (1624?-1708), an English captain in the Parliamentary Army and author from Nottingham. He was born and educated at Cambridge, but probably was not a...
Another 58 words (4 lines of text) are included under the topic Early Frenk Notables in all our PDF Extended History products and printed products wherever possible.

Migration of the Frenk family to Ireland

Some of the Frenk family moved to Ireland, but this topic is not covered in this excerpt. More information about their life in Ireland is included in all our PDF Extended History products and printed products wherever possible.

Frenk migration to the United States +

Thousands of English families in this era began to emigrate the New World in search of land and freedom from religious and political persecution. Although the passage was expensive and the ships were dark, crowded, and unsafe, those who made the voyage safely were rewarded with opportunities unavailable to them in their homeland. Research into passenger and immigration lists has revealed some of the very first Frenks to arrive in North America:

Frenk Settlers in United States in the 19th Century

Motto: Non nobis nati
Motto Translation: Born not for ourselves