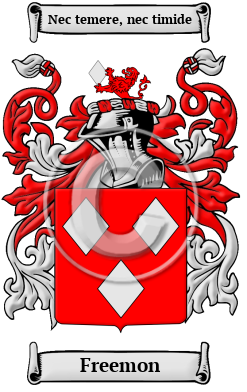 When the Strongbownians began to settle in Ireland, they initially ignored the established Gaelic system for developing of patronymic names and solely relied on their own traditional naming practices. Eventually, however, the two differing customs drew upon one another to some degree. The Strongbow settlers, unlike their Gaelic neighbors, frequently used nickname surnames. These Anglo-Norman nicknames were frequently of two types: "oath names" and "imperative names." Oath names often carried blessings or were formed from habitual expressions. Imperative names, formed from a verb added to a noun or an adverb, metaphorically described the bearer's occupations. The nick name surname Freemon is derived from a nickname for a free-born man. The surname Freemon is derived from the Old English words "freomann" and "frigmann," which both mean freeman. The surname Freemon is also used as an Anglicized version of Mac an tSaoir, which means son of the craftsman.

Early Origins of the Freemon family

The surname Freemon was first found in County Cork (Irish: Corcaigh) the ancient Kingdom of Deis Muin (Desmond), located on the southwest coast of Ireland in the province of Munster, where they were granted lands by Strongbow after the invasion of Ireland in 1172.

Early History of the Freemon family

This web page shows only a small excerpt of our Freemon research. Another 140 words (10 lines of text) covering the years 1150, 1172, 1296, 1301, and 1690 are included under the topic Early Freemon History in all our PDF Extended History products and printed products wherever possible.

Names were simply spelled as they sounded by medieval scribes and church officials. Therefore, during the lifetime of a single person, his name was often spelt in many different ways, explaining the many spelling variations encountered while researching the name Freemon. Some of these variations included: Freeman, Freman and others.

More information is included under the topic Early Freemon Notables in all our PDF Extended History products and printed products wherever possible.

Migration of the Freemon family

In the mid-19th century, Ireland experienced one of the worst periods in its entire history. During this decade in order to ease the pressure of the soil, which was actually depleted by the effects of the previous years' grain crops, landowners forced tenant farmers and peasants onto tiny plots of land that barely provided the basic sustenance a family required. Conditions were worsened, though, by the population of the country, which was growing fast to roughly eight million. So when the Great Potato Famine of the mid-1840s hit, starvation and diseases decimated the population. Thousands of Irish families left the country for British North America and the United States. The new immigrants were often accommodated either in the opening western frontiers or as cheap unskilled labor in the established centers. In early passenger and immigration lists there are many immigrants bearing the name Freemon: Ralph Freeman who settled in Virginia in 1622; along with Thomas, Bennett, Bridget, Francis, James, Jane, Richard, Thomas, and William Freeman, who all settled in Virginia between 1630 and 1670.