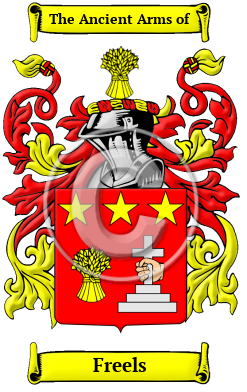 Many of the Irish surnames that are now common throughout the Western world have Gaelic origins. The Irish Gaelic form of the name Freels is O Firgil, which later became O Frigil; the name means "man of valor."

Early Origins of the Freels family

The surname Freels was first found in County Donegal (Irish: Dún na nGall), northwest Ireland in the province of Ulster, sometimes referred to as County Tyrconnel, where they held a family seat from very ancient times. The O'Firghil were descended from Eoghan, brother of St. Columcille. They were hereditary co-arbs of Kilmacrenan in County Donegal.

Early History of the Freels family

This web page shows only a small excerpt of our Freels research. Another 55 words (4 lines of text) covering the years 1203, 1299, 1573 and 1538 are included under the topic Early Freels History in all our PDF Extended History products and printed products wherever possible.

During the Middle Ages, a person's name was often recorded under several spelling variations during a single lifetime because it was essentially up to the individual scribe's discretion as to how to record an individual's name. Research into the name Freels revealed many variations, including Friel, Freel, O'Friel, O'Freel, Freiel, O'Freiel, Frehill and many more.

Another 49 words (4 lines of text) are included under the topic Early Freels Notables in all our PDF Extended History products and printed products wherever possible.

In the United States, the name Freels is the 12,220th most popular surname with an estimated 2,487 people with that name. [1]

Freels migration to the United States +

Often leaving from racial discrimination and colonial oppression, thousands of families left Ireland in the 19th century for North America aboard passenger ships. Many early immigrants found a plot of land to call their own, something unimaginable for most Irish families. Those that arrived later were often accommodated as laborers since there was a large demand for cheap labor. This was the fate for many of the families that arrived in North America during the Great Potato Famine of the late 1840s. Whether they became agrarian settlers or industrial workers, the Irish that came to North America were invaluable for rapid development of the infant nations of the United States and Canada. Early North American immigration records have revealed a number of people bearing the Irish name Freels or a variant listed above:

Freels Settlers in United States in the 19th Century