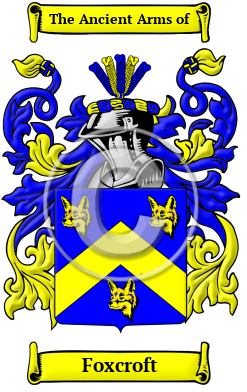 The ancestors of the Foxcroft surname lived among the ancient Anglo-Saxon culture. The name comes from when they lived beside an enclosure or croft. The surname Foxcroft is a topographic surname, which was given to a person who resided near a physical feature such as a hill, stream, church, or type of tree. Habitation names form the other broad category of surnames that were derived from place-names.

Early Origins of the Foxcroft family

The surname Foxcroft was first found in Lancashire near the Yorkshire border where one of the first records of the was found, namely Johannes de Fowscroft who was listed in the Yorkshire Poll Tax Rolls of 1379. [1]

Early History of the Foxcroft family

Before English spelling was standardized a few hundred years ago, spelling variations of names were a common occurrence. Elements of Latin, French and other languages became incorporated into English through the Middle Ages, and name spellings changed even among the literate. The variations of the surname Foxcroft include Foxcroft, Foxcrofte and others.

Notables of the family at this time include George Foxcraft (c. 1634-1715), English administrator, Agent of Madras in 1665 and 1668 to 1670; Thomas Foxcroft, (1697-1769), American Puritan minister of the First Church in Boston, Massachusetts and author. Foxcroft was born on February 26...
Another 44 words (3 lines of text) are included under the topic Early Foxcroft Notables in all our PDF Extended History products and printed products wherever possible.

Foxcroft migration to the United States +

Foxcroft Settlers in United States in the 17th Century

Foxcroft Settlers in United States in the 18th Century