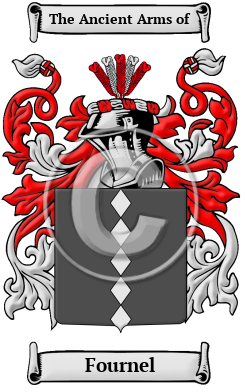 The ancient history of the Fournel name begins with the Norman invaders of Britain. The name is derived from some of the many place names in Northern France created from the Old French word "fournel." One family resided in the area of Furneau-sur-Baise, near Falaise, France. [1] The Normans frequently used the name of their estate in Normandy as part of their name. Other Norman invaders took names from their recently acquired estates in England.

Early Origins of the Fournel family

The surname Fournel was first found in Somerset where Odo de Furnell was held in capite in 1086 [2] Later, Galfrid de Furnell was Sheriff of Devon 1 Hen. II (during the first year of Henry II's reign.) His son Henry followed him in the office 25 Hen. II. and 7 Richard I. Alan Furneaux, in 1165, was one of the Justiciaries. One of their seats was at Kentisbere.

"Within less than forty years after the conflict at Hastings, Henry I. granted the Manor of Fen Ottery, in Devon, to Allan de Furneaux, whose soil Galfrid de Furneaux of that place served as Sheriff of Devon, in 1154, as did his son Sir Alan de Furneaux in 1199. From the Testa de Neville and other sources, the Manor of Fen Ottery can be traced in the possession of the same family down to John de Furneaux, temp. Henry V. [3] A branch of this parent stem was established in Somersetshire, by Henry, brother of Sir Alan Furneaux, the Sheriff in 1199, and held the manors of Ashington, Kilve, &c. Three of its descendants, all bearing the Christian name of Matthew, occur on the list of Sheriffs of Devon: the last Sir Matthew dying in 1315, the year of his Shrievalty. " [4]

Another, Fenn Ottery, "was for many descents held by the Furneaux by sergeantry, and so continued unto the latter end of King Edward II.'s days." They had received it from Henry I. The last heir, Sir Matthew, died in 1315, the year of his shrievalty. The name is found in Northumberland, when Robert Fitz Roger and Ralph de Furnell were joint Sheriffs in 1200, 1201, and 1202. [5]

Early History of the Fournel family

This web page shows only a small excerpt of our Fournel research. Another 88 words (6 lines of text) covering the years 1086, 1726, 1783 and 1726 are included under the topic Early Fournel History in all our PDF Extended History products and printed products wherever possible.

Anglo-Norman names are characterized by a multitude of spelling variations. When the Normans became the ruling people of England in the 11th century, they introduced a new language into a society where the main languages of Old and later Middle English had no definite spelling rules. These languages were more often spoken than written, so they blended freely with one another. Contributing to this mixing of tongues was the fact that medieval scribes spelled words according to sound, ensuring that a person's name would appear differently in nearly every document in which it was recorded. The name has been spelled Furneaux, Furnell, Fournel and others.

More information is included under the topic Early Fournel Notables in all our PDF Extended History products and printed products wherever possible.

In France, the name Fournel is the 2,109th most popular surname with an estimated 2,995 people with that name. [6]

Fournel migration to the United States +

For many English families, the political and religious disarray that plagued their homeland made the frontiers of the New World an attractive prospect. Thousands migrated, aboard cramped disease-ridden ships. They arrived sick, poor, and hungry, but were welcomed in many cases with far greater opportunity than at home in England. Many of these hardy settlers went on to make important contributions to the emerging nations in which they landed. Among early immigrants bearing the name Fournel or a variant listed above were:

Fournel Settlers in United States in the 17th Century

Fournel Settlers in Canada in the 17th Century

Fournel Settlers in Canada in the 18th Century