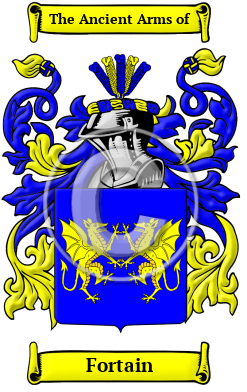 The name Fortin originally comes from the French word "fort", which means "strong". Sources believe the name was most commonly used for "un homme fort", or in English, "a strong man". [1]

Early Origins of the Fortain family

The surname Fortain was first found in Orléanais, where they held a family seat at De Fortan, a village in the department of Loire, in the arrondisement of Vendome [2].

This distinguished family later branched to Tournai in Normandy, and to Ile-de-France where they held considerable estates. The family also acquired possessions in Maine.

Louis Fortin, born in 1647, son of Philippe and Agnes (née Londin), travelled from Évreux, France to the New World in the 17th century. After settling in Quebec, Louis married Catherine Godin, daughter of Pierre and Jeanne (née Rousseliere), in Montreal on 21st November 1672. [3]

Early History of the Fortain family

This web page shows only a small excerpt of our Fortain research. Another 75 words (5 lines of text) covering the years 1590, 1621 and 1817 are included under the topic Early Fortain History in all our PDF Extended History products and printed products wherever possible.

More information is included under the topic Early Fortain Notables in all our PDF Extended History products and printed products wherever possible.

Migration of the Fortain family

Some of the first settlers of this family name or some of its variants were: François Fortin, of the branch of the family in Brittany, who emigrated to New France in 1617; Julien Fortin dit Bellefontaine, of Maine arrived in New France in 1649.