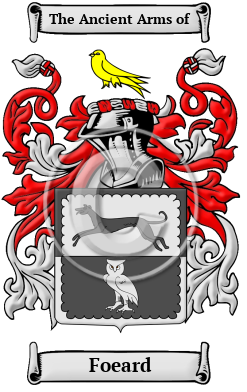 The name Foeard is from the ancient Anglo-Saxon tribes of Britain. The name was given to a person who was a keeper of the ford or river crossing. [1]

Early Origins of the Foeard family

The surname Foeard was first found in the Domesday Book of 1086 where Bruma de la forda was listed at Winton, Hampshire. [2] Years later in Somerset, Eadric æt Fordan was listed as an Old English Byname, 1100-1130. The Hundredorum Rolls of 1273 included Reginald de la Forthe in Suffolk and later, Geoffrey atte Forde was found in Sussex in 1296. [3]

The name is "characteristic of the southern and western counties. Absent or singularly rare north of a line drawn from the Wash to the Mersey. It is at present most numerous in Devon, Dorset, Gloucestershire, Hants, and Cheshire. In almost all the counties where this name is at all frequent we find it in one form or another as a place - name." [6]

Early History of the Foeard family

Sound was what guided spelling in the essentially pre-literate Middle Ages, so one person's name was often recorded under several variations during a single lifetime. Also, before the advent of the printing press and the first dictionaries, the English language was not standardized. Therefore, spelling variations were common, even among the names of the most literate people. Known variations of the Foeard family name include Forde, Ford, Alford and others.

Notables of this surname at this time include: William Ford or Foord (c.1559-1616?), Church of England clergyman, he may have been the same William Ford who became Rector of Thurleigh, Bedfordshire in 1594 or the William Ford who became Vicar of Bristow, Herefordshire in 1615; Thomas Ford (1598-1674), an English...
Another 49 words (4 lines of text) are included under the topic Early Foeard Notables in all our PDF Extended History products and printed products wherever possible.

Migration of the Foeard family to Ireland

Some of the Foeard family moved to Ireland, but this topic is not covered in this excerpt.
Another 126 words (9 lines of text) about their life in Ireland is included in all our PDF Extended History products and printed products wherever possible.

Migration of the Foeard family

For political, religious, and economic reasons, thousands of English families boarded ships for Ireland, the Canadas, the America colonies, and many of smaller tropical colonies in the hope of finding better lives abroad. Although the passage on the cramped, dank ships caused many to arrive in the New World diseased and starving, those families that survived the trip often went on to make valuable contributions to those new societies to which they arrived. Investigation of the origins of family names on the North American continent has revealed that early immigrants bearing the name Foeard or a variant listed above: Charles Ford who settled in Virginia in 1635; John Ford settled in Salem Massachusetts in 1630; Edward, Frederick, Hugh, James, John, Michael, Patrick, Phillip, Richard, Thomas and William Ford all arrived in Philadelphia between 1840 and 1865..