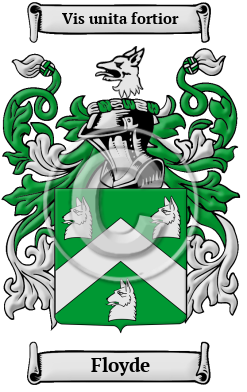 The Irish surname Floyde begins was originally the Gaelic MacTuile, O Maoltuile, or Mac Maoltuile. "tuile" means "flood," and the names Tully and Flood were at one time interchangeable in Ireland. However, some of the Gaelic names that have become "flood" may have been mistranslations, and that contained the Gaelic "toile," meaning "toil," or "will." In Ulster, Floyd has sometimes been used as a spelling variant of Flood; however, Floyd is normally a cognate of the Welsh name Lloyd, derived from the word 'llwyd,' which means ‘grey.’

Early Origins of the Floyde family

The surname Floyde was first found in Connacht, where they could be found since ancient times, and were hereditary physicians to the O'Connors of Galway.

Early History of the Floyde family

Pronunciation, rather than spelling, guided scribes and church officials when recording names during the Middle Ages. This practice often resulted in one person's name being recorded under several different spellings. Numerous spelling variations of the surname Floyde are preserved in these old documents. The various spellings of the name that were found include Flood, Floyd, Floode, Floyde, Tully, MacTully,Talley, Tally and many more.

Notable amongst the family name at this time was Thomas Tully (1620-1676), an English clergyman of Calvinist views. He was born in St. Mary's parish, Carlisle and was son of George Tully. "After the Restoration he was created D.D. on 9 Nov. 1660, and nominated one of the Royal Chaplains in Ordinary, and in April 1675 was appointed Dean of Ripon. " [1] Edward Floyd, Floud or LLoyd (d. 1648?), was a Catholic barrister who became steward in Shropshire to Lord-Chancellor Ellesmere and the Earl of Suffolk. [1] Henry Floyd (1563-1641), was an English Jesuit, elder brother of Father John Floyd, born in...
Another 119 words (8 lines of text) are included under the topic Early Floyde Notables in all our PDF Extended History products and printed products wherever possible.

Migration of the Floyde family

During the 19th century thousands of impoverished Irish families made the long journey to British North America and the United States. These people were leaving a land that had become beset with poverty, lack of opportunity, and hunger. In North America, they hoped to find land, work, and political and religious freedoms. Although the majority of the immigrants that survived the long sea passage did make these discoveries, it was not without much perseverance and hard work: by the mid-19th century land suitable for agriculture was short supply, especially in British North America, in the east; the work available was generally low paying and physically taxing construction or factory work; and the English stereotypes concerning the Irish, although less frequent and vehement, were, nevertheless, present in the land of freedom, liberty, and equality for all men. The largest influx of Irish settlers occurred with Great Potato Famine during the late 1840s. Research into passenger and immigration lists has brought forth evidence of the early members of the Floyde family in North America: Edmund Flood who landed in Massachusetts in 1620; David Flood settled in Virginia in 1637; followed by Abraham Flood 1650; John in 1652; Arthur Floyd settled in Virginia in 1647.