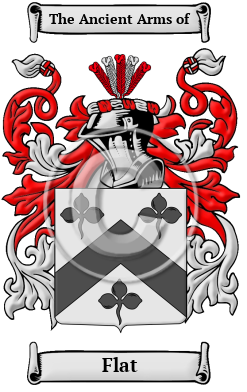 The Flat family name comes from a place named by the Viking settlers who arrived in the shores of Scotland in the Middle Ages. The Flat name comes from someone having lived in Flet, a place-name found in the Orkney Islands. This was probably derived from the Old Norse word flötr, which meant "stretch of arable land."

Early Origins of the Flat family

The surname Flat was first found in the Orkneys, where they held a family seat from very ancient times. They derived their name from the village of Flett in the parish of Delting in the Shetland Islands. The name is mentioned in the early Viking sagas, and was one of the most prominent names mentioned in those sagas.

"The family was at one time of such importance that, if they had ever been 'of Flett' we should have evidence of it" [1]

Early History of the Flat family

This web page shows only a small excerpt of our Flat research. Another 103 words (7 lines of text) covering the years 1427, 1480, 1509, 1516, 1665 and 1767 are included under the topic Early Flat History in all our PDF Extended History products and printed products wherever possible.

Contemporary spellings of ancient Scottish names often bear little resemblance to the original recorded versions. These spelling variations result from the fact that medieval scribes spelled words and names alike according to their sounds. Flat has been spelled Flet, Flett, Fletts, Flait and others.

Another 50 words (4 lines of text) are included under the topic Early Flat Notables in all our PDF Extended History products and printed products wherever possible.

Migration of the Flat family

The colonies on the fertile east coast of North America soon had many farms run by Scots. These hardy settlers provided a backbone for the great nations of the United States and Canada that would emerge in the next centuries. Early North American immigration records have revealed a number of people bearing the Scottish name Flat or a variant listed above, including: M. Flett who landed in Philadelphia, Pennsylvania in the 18th century.