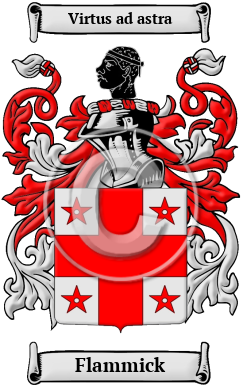 Early Origins of the Flammick family

The surname Flammick was first found in Cornwall where they held a family seat as Lords of the Manor of Buscane.

"The barton of Bocarne or Boscarne, in this parish, has for several centuries been the property of the ancient and respectable family of Flamank, some branches of which have resided on it at least seven generations before the days of Barnard Flamank, who died in 1656. It is known to have been in the possession of this family, about seven generations prior to the days of Thomas Flamank, or Flammock, who raised the standard of rebellion in the year 1496. Both Hals and Lysons concur in the opinion, that the Flamanks of Boscarne are the lineal descendants of Mark de Flamank, who lived in the reign of Henry II. about the year 1160. But as Thomas Flamank, who was engaged in the rebellion, left no male issue, it is demonstrable that the Flamanks now living, must have descended from some other branch of the general stock; and this was most probably from John, who was the younger brother of Thomas. and this was most probably from John, who was the younger brother of Thomas. Boscarne is at present the property of William Flamank, D. D. who is the representative of this ancient family, and who resides occasionally at this seat of his ancestors, although the mansion is in the general occupation of a farmer." [1]

"Gonronson, [in the parish of St. Enoder] which had been for a considerable time a seat of some younger branches of the Flamank family, was purchased of them by Hawkins." [1]

Early History of the Flammick family

Cornish surnames are characterized by a multitude of spelling variations. The frequent changes in surnames are due to the fact that the Old and Middle English languages lacked definite spelling rules. The official court languages, which were Latin and French, were also influential on the spelling of a surname. Since the spelling of surnames was rarely consistent in medieval times, and scribes and church officials recorded names as they sounded rather than adhering to any specific spelling rules, it was common to find the same individual referred to with different spellings of their surname in the ancient chronicles. Moreover, a large number of foreign names were brought into England, which accelerated and accentuated the alterations to the spelling of various surnames. Lastly, spelling variations often resulted from the linguistic differences between the people of Cornwall and the rest of England. The Cornish spoke a unique Brythonic Celtic language which was first recorded in written documents during the 10th century. However, they became increasingly Anglicized, and Cornish became extinct as a spoken language in 1777, although it has been revived by Cornish patriots in the modern era. The name has been spelled Flamock, Flamank, Flamoke, Flamook, Flamick, Flammick, Flammock, Flammoke, Flamanke, Flamocke, Flemocke, Flemok and many more.

Notable amongst the family at this time was Thomas Flamank (died 1497), an English lawyer from Cornwall, England who together with Michael An Gof led the Cornish Rebellion of 1497 against taxes. As a result of that action, he was executed on June 24th of...
Another 44 words (3 lines of text) are included under the topic Early Flammick Notables in all our PDF Extended History products and printed products wherever possible.

Migration of the Flammick family

In the immigration and passenger lists a number of early immigrants bearing the name Flammick were found: the name represented in many forms and recorded from the mid 17th century in the great migration from Europe. Migrants settled in the eastern seaboard from Newfoundland, to Maine, to Virginia, the Carolinas, and to the islands..